Rainforest animals include some of the worlds largest and most unusual creatures, but just what is a rainforest? And what is the difference between a forest, a rain forest and a jungle?

The word "forest" basically means an area with a large density of trees. Forests can occur in low or high elevation, can be relatively dry or very rainy, and can be of basically any temperature that still supports tree growth.

The term "rainforest" refers to a forest that receives at least 60 inches of rainfall a year.

There are two types of rainforests, temperate rainforests with moderate temperatures and even some snowfall, or tropical rainforests which occur close to the equator and rarely dip below 60 degrees.

Rainforests are characterized by having such a thick upper canopy of growth, that little sunlight reaches the ground. This means that young trees must be able to grow with limited sunlight, and it also means that the undergrowth in a rainforest is not particularly dense.

It is generally easier to walk through a rainforest than a jungle. A jungle, however, is a different story.

The jungle is an area of forest that combines warmer temperatures and dense vegetation. The tree canopy is not as thick in a jungle as it is in a rainforest, allowing sunlight to reach more of the ground.

Vines, shrubs, grasses and moss grow in the lower third of a jungle making it very difficult to penetrate on foot. Jungles are simply warm forests that are very densely vegetated at the forest floor. Rainforests are forests with a great deal of rainfall and very thick vegetation at the canopy.

what are the parts of a rainforest? 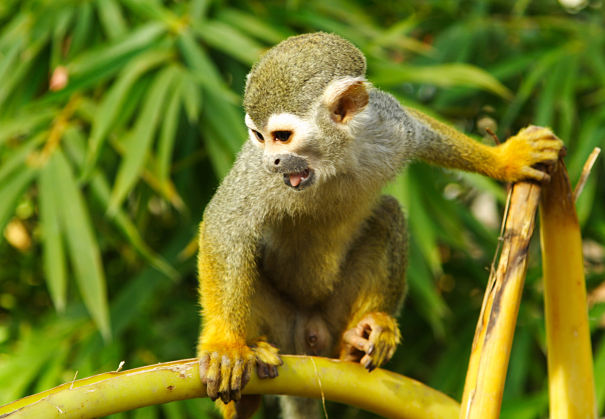 Rain forests are divided into very distinct layers of different types of vegetation.These layers are called "stories", because, like a building, they are stacked on top of each other.

The top floor of the rainforest forms a platform, where the tops of the tallest trees, called emergents, receive the vast majority of sunlight. Larger monkeys may sunbathe or dine on the platform, and bats and birds of prey nest there, keeping watch for small creatures peeking out.

The trees at the top can reach over 250 feet in height. These are broad leafed trees that have flat leaves like deciduous trees but are evergreen like coniferous trees.

Beneath the emergents is the canopy, a section of thick growth that may be as much as 80 feet deep. Within the canopy are the branches, leaves and twigs of the emergent trees, and also large colonies of plants called epiphytes

Epiphytes are a classification of small plants that grow directly on larger plants without smothering or harming them. These vines, herbs and flowers root right into the trunks of the emergents and thrive in the canopy where they can receive sunlight that they would never be able to get if they rooted in the ground. The epiphyte population, and the number of plant species in the canopy, create a density that begins to block out much of the sun to the understory beneath.

The trees in the understory are between 10 and 30 feet high. They are broad-leafed but have fewer limbs, and stretch out thinly to drink up the little spots of sunlight that trickle down through the canopy. Understory trees are able to survive on very limited light, and their saplings can root and begin to grow in the relative darkness of the rainforest floor.

Finally, the floor of the rainforest, which receives less than 2% of the available sunlight, is a deep rich bed of leaf litter and animal waste. A compost heap that spurs further growth and greenness.

The worlds rainforests cover only about 6% of the globe, but provide safe harbor for nearly 60% of all the worlds species. Scientists believe there are literally thousands of undiscovered species of animals, birds reptiles, insects and plants living in the canopy alone.  -Rainforest Animals Facts

can it snow in a rain forest? panda in the snow

Rainforests are forests that receive a large amount of precipitation, but they don't necessarily have to be warm. There are two types of rainforest - temperate and tropical.

The tropical rainforest occurs close to the equator and is warm, (usually hot) and rainy year-round.

The temperate rainforest occurs farther away from the equator and has seasonal changes including snowfall in some northern areas. In the bamboo rainforests of China, snowfall occurs fairly regularly and accounts for some of the yearly precipitation that qualifies it as a rain forest.

One of the world's most beloved animals - the giant panda - lives in the temperate bamboo rainforests of China. The bamboo in these forests is actually the worlds largest species of grass, and not a tree. It makes up the 25 foot to 30 foot high under-story of the rainforest and is the only ecosystem that can provide the giant panda with the kind of food and shelter it requires. - Rainforest Animals The brown throated three-toed sloth is probably the ultimate rainforest animal. They spend about 98% of their lives high up in the rainforest canopy and only go down to the forest floor to relieve themselves - about once a week!

Everything about this animal is designed with tree top living in mind. They have specialized claws that allow them to grip branches effortlessly and they spend the majority of their lives hanging up-side-down. Even the fur of three-toed sloths is special.

The fur on the torso and limbs grows in the opposite direction from most other animals. The sloth has a part down the center of its belly, not its back, and all the hairs grow outward from there. The hair on the arms and legs grows up the limbs, toward the body, not away, and the follicles point everything so that when the sloth is hanging upside down from a limb in a rain storm, all the rain flows away from it and towards the ground.

Imagine if it were not designed this way. The rain would get caught and pool up between the rows of hairs and the animals skin.

Beyond just growing in the opposite direction, the sloths fur is usually has a green tinge, especially during times of high rain. Due to the moisture in the air and the sloths very slow movements, algae is actually able to grow on its fur.

The algae provides insulation and camouflage in the green forest. In addition to algae, moss, lichens and even moths and other insects have been known to live in the three-toed  sloth's spongy mat of fur. - Rain forest Animals