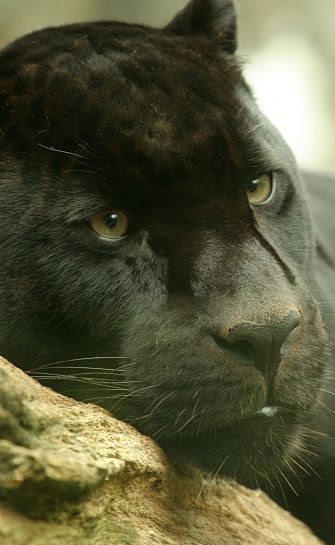 Portrait of a Jaguar

The jaguar is the only big cat that lives in the New World. It ranges possibly as far north as the Southwest of the United States (where some individuals might still exist in Arizona) through Mexico, Central America and most prominently in South America where it is the apex predator in the rain forests of the Amazon basin.

The jaguar likes water and loves the Brazilian wetlands where it catches caiman, anacondas and turtles right in the water, dragging them out to dine on a marshy bank or a low-slung branch.

Jaguars are much stockier than leopards and have a much larger, rounder skull. A few minutes looking at pictures of both species and the differences, particularly in the shape of the head and face, become apparent.

In general, many jaguars have spots in the center of the rosettes on their coats which leopards generally do not, but the coats of these species vary greatly and really can't be reliable in identification.

The jaguar was extensively hunted for its fur in the past century, with jaguar coats being the most desirable of all the furs at one point. Jaguars in the tens of thousands were poached and killed for the fur industry up until the 1990's when the first conservation efforts were started.

Today, jaguars are not often poached for their fur, but are usually killed by local villagers and farmers. The concern is for their livestock, not necessarily for their own safety, as, despite its size and shear killing power, the jaguar rarely attacks human beings.

The jaguar is the least likely of all the big cats to attack a human being, and is responsible for far fewer reported attacks on people - fatal or otherwise- than even its much smaller American cousin the mountain lion.

There were nine subspecies of jaguar recognized up until just a few years ago, but the most recent scientific and DNA research suggests their is only one species that varies significantly in size, and somewhat in color, due to differences in habitat across its range.

Jaguars can be found in populations that average about 100 pounds in denser jungle, (these areas also produce the most black panthers), and over 300 pounds in more open ranges where larger prey like horses and cattle are available.  - Jaguar Facts what is a black panther? Among both jaguars and their Old World cousins the leopards, there is a type of coloration known as melanism which is an increase in dark pigment of the skin and fur.

Melanism occurs in about 6% of all individuals, and melanistic cats can be born into the same litter as normally colored cats.

This color variation is what is known as a "black panther". From a distance, Black panthers appear to be solid black in color but close up you can actually see spots on the coat.

The leopard is, of course, very similar in appearance to the jaguar, and is easily mistaken for one. Jaguars are generally much larger and more bulky than leopards, and have much broader, rounder heads with smaller ears and eyes.

Leopards have much larger paws pound- for-pound, and extraordinarily long whiskers, probably due to their nocturnal hunting habits in heavy cover.

Because of their bulk, jaguars are not quite as agile as leopards up in the trees, though they are still excellent climbers, they tend to spend their time in lower branches.

But the jaguar is the apex predator in most of its range and does not have the leopards constant concern of lions, hyenas and African wild dogs stealing its prey or threatening its safety.

To some degree, the jaguars lifestyle is closer to that of the tiger, who is also the apex predator in its range, having only human beings to fear.

The jaguar simply does not have to employ the leopards strategies of extreme stealth and elusive activity high up in trees in order to survive, it can lounge comfortably wherever it sees fit.

Melanism occurs in jaguars and leopards at approximately the same rate and the term "black panther" applies to melanistic individuals of both species.

Among cat species, the American mountain lion is also referred to as a "panther", as well as "puma" and "cougar", but mountain lions are only seen in their typical buff color and don't have melanistic individuals within the species. - Jaguar Facts. The jaguar, like the leopard, is a true loner. Adults do not interact with each other except when defending their territory or mating.

Territories are marked with typical expressions of scratch marks on designated marking trees, urine sprays, and when there is a sense that another jaguar might be near, huffing sounds that serve as a warning. Confrontations are not desired, but in areas where their range is being encroached upon, males in particular may have rather violent battles over home turf.

When a female is in season she uses a rowling type call similar to a house cat in heat (but naturally much louder!).

She will pair up with a male for 4 to 6 days and then send him off, often rather aggressively. Jaguar fathers never assist with young ones, or even hang around more than a day or two after impregnation.

In typical big cat fashion, the female will prepare a nesting area and in about 100 days give birth to one to three cubs - two is typical.

Newborn jaguars are blind and helpless when born, and the mother moves them often to avoid the nest being detected by monkeys or snakes.

At three months the cubs will try their hand at hunting and by about eighteen months they will leave their mother to establish their own range.

Once on their own they are unlikely to ever see their mother again, and will live just as solitary a life as she did, only keeping tabs on the other cats in the neighborhood by sniffing marks and spray samples. - Jaguar Facts 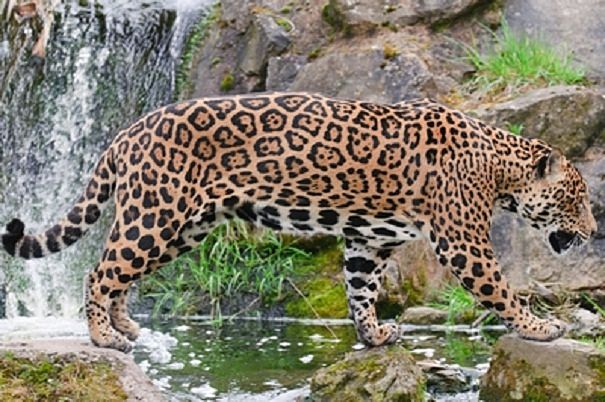 The jaguar has an amazing coat of orange, buff or tawny fur, decorated with large black rosette shaped spots, and black barring on the end of the tail.

The spotted coat might seem to indicate a close evolutionary relationship to the leopard, but it is believed that the jaguar actually evolved in a more similar course to the tiger, and has a much more-tiger-like lifestyle.

The tiger and the jaguar are the only two cat species that seem to really enjoy the water.

For jaguars, water is vital in its environment, and the jaguar can most commonly be found in marshland, rain forest and wetlands throughout South and Central America.

Although jaguars can be found in somewhat arid environments too, they must at least have access to a body of water such as a lake or river. They bathe, wallow, hunt and even occasionally eat in the water, and revel in the moisture and humidity of the rain forests. - Jaguar Facts

how do jaguars kill their prey? Compared to other big cats, and the leopard in particular, the jaguar has an unusual shape to its skull and face.

The jaw muscles are immense and are attached to the skull high up on the head giving jaguars a rounded, almost bulbous look to their heads.

The muscular jaw provides the jaguar with the most powerful bite of all the big cats.

The jaguar is known to use its bite power to crack open turtle shells, and, living in marshy territories, hunts and eats turtles regularly. With this adaption the jaguar has also developed a unique way of killing other prey.

Although jaguars often use a more typical big cat throat bite to kill their prey, they are also known to use a bite directly to the head.

With their amazing bite-strength they plunge their fangs right through the skulls of animals as big as cattle, piercing the brain and ending any struggle almost immediately  - Jaguar Facts

jaguars in the united states Jaguars reportedly roamed much of the Northwest U.S. - including Arizona, New Mexico and California- when the nation was first settled, but the animals were quickly uprooted and eliminated by lots of folks with rifles.

But in 2009 a wild male was captured just south of Tuscon Arizona.

The individual was believed to be the last jaguar in the U.S. and the plans were to tag him with GPS and monitor his activities.

Unfortunately while being examined it was discovered that the jaguar, who was believed to be about 16 years old and had been captured and tagged once before in 2004, was in very poor physical condition with many broken teeth and the beginning of kidney failure.

The decision was made to euthanize him, and an era probably ended on that day - Jaguar Facts