One of the least known hyena facts is that they are actually accomplished hunters, not just sneaky scavengers. Although they resemble both dogs and cats, the three species of hyenas and the aardwolf are in their own separate and very unique family called Hyaenidae.

The most well-known is called the spotted hyena, also known as the laughing hyena due to the unusual and eerie sounds it makes. After the African lion, the spotted hyena is the largest carnivore in Africa, weighing up to 180 pounds and standing up to 30 inches at the shoulder. These are complicated, intelligent, and highly social animals with a really awful reputation.

For centuries hyenas were said to have the souls of the damned trapped inside of them, and when a clan is on the hunt, calling and squealing to one another, it certainly sounds like cackling demons.

In addition, female spotted hyenas have very unusual genitalia that outwardly resemble that of a male. This shocks even many modern cultures who fear it as a sign of anarchy or the work of the devil.

And, of course, hyenas have long been considered scurrilous and sneaky scavengers, but they are actually skilled hunters and clans will organize to take down prey as large as zebra. Most clans hunt and kill the majority of what they eat, but, like all the animals of the African plains, they will also steal absolutely anything that isn't nailed down.

Although they are zoologically classified in their own family, hyenas share tendencies with both felines and canines. Like canines they hunt by running down their prey and grabbing it with their mouths, not their paws. But, like felines, they groom themselves often and scent-mark their territory.

Unique to hyenas are their amazing bone-crushing teeth. Short, powerful canines are on display towards the front of the jaw, but deep in the back of the jaw where they can exert the most leverage, are massive carnassials which pulverize the entire skeletons of prey as big as wildebeast. So much bone material is consumed that the hyenas droppings have a chalky white color.

Socially, the spotted hyena lives in a matriarchal society quite rare in the world of mammals. Females are larger, more muscular and definitely more aggressive. The highest ranking male in the clan is generally subordinate to the lowest ranking female. These spotted hyena clans are rude, boisterous, highly social groups that spend allot of time pushing and shoving but will ultimately spend the afternoon siesta snuggled in a huge shaggy pile. - Hyena Facts 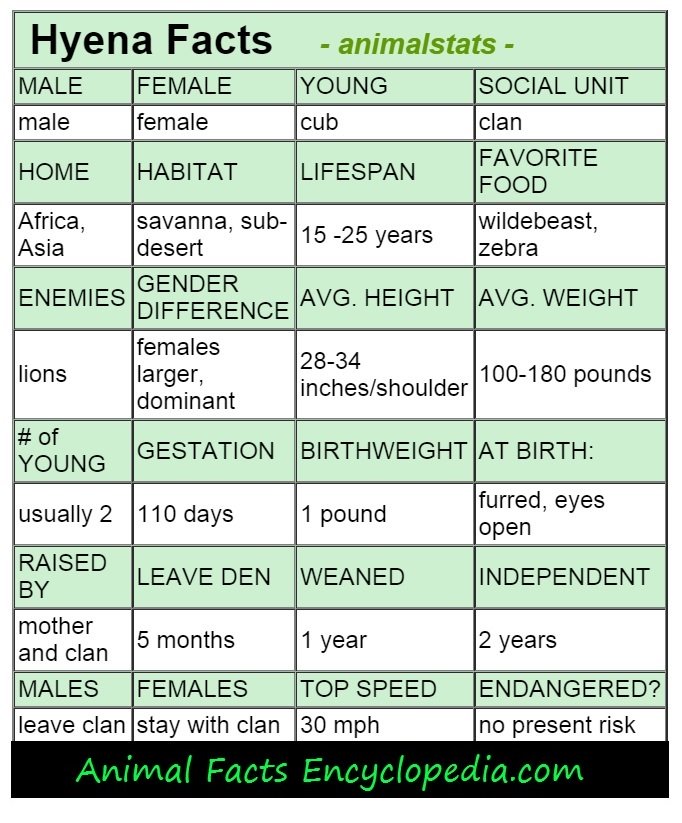 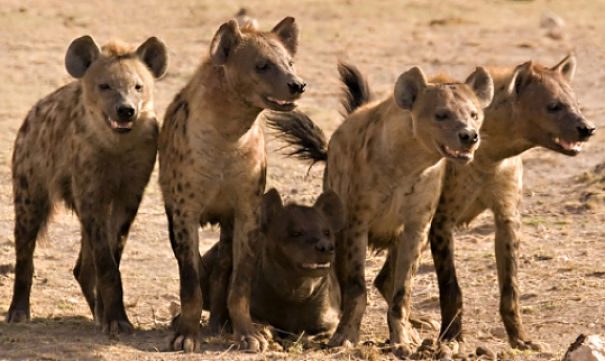 The older the hyena, the gnarlier their ears are. Why? Because although they are tight-knit and extremely

dependent on eachother, the members of a hyena clan spend alot of time beating eachother up.

Most interesting and unique is that it's the females doing most of the damage.

Female hyenas actually have more testosterone then males, can be about 30% larger, and significantly more muscular. Why this arrangement? Nobody is really sure, but the hyena is a very successful species that has adapted to many situations over thousands of years.

In ancient Egypt, spotted hyenas were raised and harvested for their meat, occasionally being kept as rather large and messy pets. More recently, as humans

have encroached further and further into their world, hyenas have learned the skills of dodging traffic and dumpster diving.

On the savanna, hyenas center their lives around a specific territory well marked by community "latrines" where the entire clan will leave mounds of chalk-colored feces.

Hyenas have such powerful teeth and jaws that they will eat every inch of a carcass - including the bones. When the bones are digested they turn the hyenas excrement a very distinctive off-white color, so piles of white poo mean "this land is ours!" - Hyena Facts One of the most amazing hyena facts is that they are almost impossible to sex. Their appearance, habits and sounds are already weird, but when it comes to sex, there is no more confusing creature than the spotted hyena. Unusually high testosterone levels in female spotted hyenas create not only larger, stronger and more aggressive girls, but also transform the female sex organs.

The clitoris of the female spotted hyena is a tube-like pseudo penis 6 to 7 inches long that looks almost identical to a male penis. Completing the illusion, the labia are fused together in what appears to be a scrotum.

These organs make it nearly impossible for even experienced hyena observers to tell the difference, and have caused many to believe that hyenas are clans of devilish hermaphrodites whose cackles mock the norm.

But actual intercourse is no laughing matter, it is a delicate and stressful process where a submissive male must somehow arch his way under the female and insert his penis into a dangling tube.

The female urinates and gives birth through the urogenital canal which runs down the center of the clitoris. Birth is extremely difficult due to the length of the canal, and death during the first delivery is about 1 in 10. Subsequent deliveries are easier. There are usually two cubs delivered, but fighting between the cubs often occurs, particularly if they are the same sex, and the weaker sibling will often perish in the first weeks.

Young males will leave the clan at about 2 years, females will remain for life. - Hyena Facts

is the hyena a cat or a dog? Our tendency when looking at an unusual animal is to try to relate it to something familiar.  Hence the common question "is a hyena a dog or a cat? Or maybe a bear?" Fact is, hyenas are hyenas, or more scientifically, members of the small 4 species family called Hyeanidae.

In the carnivore family tree are two main groups, feliformia, or "cat-like" carnivores, and caniformila, or "dog-like" carnivores. The ancestors of the modern hyena were cat-like tree dwellers that spawned not only cats but civets, mongoose and binterong.

So hyenas are in the sub-order feliformia, along with  all modern felines. But over the course of evolution, hyenas developed many of the behaviors and physical features of the dog species  that lived in the same environment. Because those behaviors and physical attributes were effective adaptions to the environment and filled a similar ecological niche, this is called concurrent evolution, and it is why hyenas look and act so much like African wild dogs even though they do not share the same ancestors.

Ultimately, hyenas are hyenas, or more scientifically four species in the very specialized family Hyaenidae. They share biological ancestors with cats but developed more like dogs. Among modern animals, they are most closely related to the civets which are medium sized carnivores that resemble weasels, but also have their own separate family.    - Hyena Facts

laughing all the way

math and the next meal Just like in any rough neighborhood, the kids on the Savanna find safety in numbers.

Five hyenas might steal a fresh kill from a lion, Ten African wild dogs can take a zebra carcass from a hyena, and a big enough gang of vultures will drive just about everyone away from whatever is left.

Holding on to a meal on the plains comes down to stealth, intellect, courage, and -most important- your peeps beside you.

While lions, hyenas and wild dogs all hunt and kill much of their own prey, stealing is part of the rhythm, and plunder keeps you fat, but the vulture does not hunt at all, and is the only true scavenger in this circle of adversaries. .. Hyena Facts For those who might find the common spotted hyenas appearance slightly off-putting we offer the two uncommon cousins, the straggly brown hyena, and the amazingly odd, joker-face of the striped hyena.

Smaller and far less populous than the spotted hyena, these two species somewhat mirror the spotted in lifestyle and fill the same ecological niche. The biggest difference, however, is 'tude.

While the infamous spotted hyena is pugnacious and will defend itself with startling ferocity, the striped hyena and the very shy brown hyena will actually "play dead", similar to a opossum, when faced with a threat. So, even for the rugged spotted hyena it's true - our closest relatives can be the source of our deepest embarrassment! - Hyena Facts