Portrait of an African Lion

The African lion is a massive, tawny colored predator of the cat family. On average, the lion is the tallest of the big cats, but the Siberian tiger tends to be considerably longer and heavier.

The ultimate apex predator and an awesomely beautiful creature, the adult male lion has a flamboyant  ruff of remarkably long hair around the head and neck known as a mane, which begins to develop when he is about 10 months old.

Although it has been speculated that the purpose of the mane is to provide protection in fights with other males, it is more likely an indication of fitness, condition and virility and it's color has been found to be linked to testosterone levels.

Lions with darker manes had more testosterone, and were found to be more appealing to female lions, and more intimidating to male opponents.

An adult male African lion is over 400 pounds and 4 feet tall at the shoulder. They are equipped with enormous fangs and incredibly powerful necks, forelimbs and claws that allow them to hunt, on average, the largest prey of any land animal.

Regularly taking down 600 pound plains zebras and 1,300 pound cape buffalo, African lions will also take on giraffes and even elephants in the right situation.

Compared to other cats, lions are very social animals and live in groups of 5 to 25 individuals called prides. The pride is made up of several related adult females, their cubs, and some adult males.

These pride males, often brothers, may come and go, and even be members of more than one pride at a time. They must continually prove themselves as established pride leaders, fending off all other males in serious, sometimes fatal fights.

The females hunt together, only occasionally being helped by the male members, but when the hunt is over, the adult males, generally 30 to 40 percent larger, eat first.

Many adult male lions, however, live alone or in small "bachelor" groups, not bold enough or strong enough to take on established males. And pride leaders themselves, worn down from constant battles, will eventually succumb to a stronger rivals and retreat back to a solitary lifestyle. king of the jungle? The familiar African lion lives on the savanna grasslands of central and southern Africa.

Asiatic lions are also called Persian lions or Indian lions. They are a bit smaller than African lions, have distinctive skin folds that can be seen running along the sides of the torso, and a much sparser mane.

They have been actively protected by the Indian government for the last 30 years, and their small jungle territory was declared a national park where human activity is prohibited.

Thanks to this concerted effort the number of Asiatic lions in the wild has increased from a low of about 250 individuals to over 500 in a fairly short period. The female lion is poly-estrus, which means she may ovulate up to 4 times a year until she is impregnated. When in estrus or "heat", she will pair up with a male of the pride for a few days during which time they will mate repeatedly.

Her pregnancy takes 3 1/2 to 4 months and when ready to deliver she will leave the pride to find a good nesting spot. She delivers 2 to 4 cubs and remains secluded with them for several weeks before returning to the pride and introducing the new members.

This is a dangerous time for mother and cubs, and she will usually fast for days while tending to her young. When she returns to the pride with the new cubs she is greeted with much nuzzling, inspecting and celebrating.

The cubs will be nurtured by the whole pride at this point, and if cubs are orphaned, another lioness will usually adopt them and even nurse them.

Female cubs will live with the pride their entire lives and never leave. Male cubs will leave the pride, usually driven off by the adult males, when they are about two years old. They will live alone, or band together in small groups of "bachelor" males called "coalitions" Many male lions will never return to a pride, and will never mate.

Only the strongest and boldest will attempt to takeover a pride by driving the established males out. Once a new male or new group of males take over, they will often - but not always- kill the youngest cubs in order to begin their own families.

The mothers are helpless against this, but in the life of a lioness this doesn't happen often. New males may come in every two years or so, and if the timing is right, the cubs may be old enough not to be harmed.

The main catalyst for the killing of the cubs appears to be an attempt to free up those mother lions to mate again, and, in fact, lionesses who lose their cubs for almost any reason will come back into heat very quickly. - African Lion Facts Far more canine than feline in behavior, the lion pride is a close-knit, social group where individuals maintain long term, often life-long relationships, cooperate in the raising of the young, and hunt down dinner as a unit.

Unlike any other cat species, members of the lion pride will participate in the raising of cubs, lionesses have been known to nurse orphan cubs and raise them as their own, and even males have been observed protecting, correcting, and babysitting.

a thorny crown for the king of beasts While it's often said the lioness does "all the work", the truth is that the life of a male lion can be much tougher.

As young adults, males are pushed out of the pride by the dominant males of the moment. They may spend years alone or in small bachelor groups of other males called rouges, often made up of brothers.

As they mature and grow, they prepare to return to the pride or neighboring prides and unseat the dominant males, in fierce, sometimes fatal battles. If they succeed they will often kill any cubs from the former king.

Now, as the dominant males, they will mate with the females in the pride as they come into season, and otherwise doze in the sun or sleep in the shade up to 20 hours a day, waiting for the females to catch dinner.

They will battle any males who try to overthrow them, and eventually they will loose the fight, after only a few months or short years of glory, and sometimes to one or more of their own sons.

Banished again from the pride, older and war-weary, they most likely spend the rest of their years on the outside of the pride looking in.

Rivaled only by the horse, the male African lion in full mane is a true icon of the animal kingdom. His unmistakable image has graced some of the oldest coins, works of art, and jewelry in history. We humans have found ourselves awestruck for many thousands of years and for fine reason. 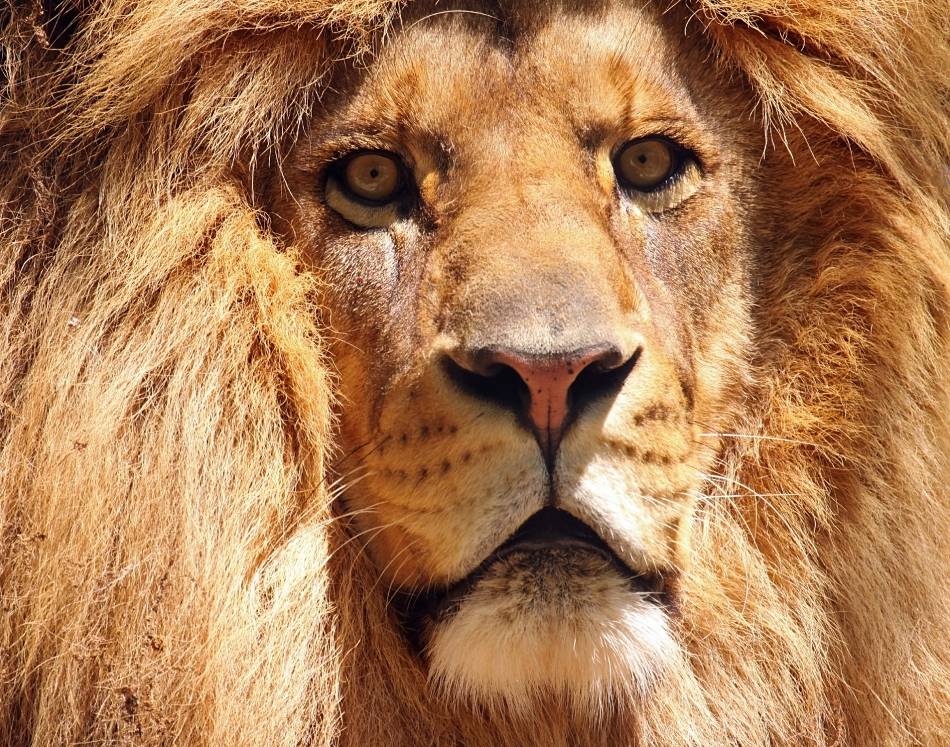