And yes - the plural of mongoose is mongooses - not mongeese!

Feliforms and caniforms have significant differences in skull structure among other things, and are classified based on these complex, skeletal criteria. So the mongoose, which shares ancient ancestors with cats, is actually most closely related to the civet, and is in the same superfamily as the hyena and the leopard.

Simply put, the mongoose is not a weasel. The meerkat, however, is a mongoose, but since it is such a popular little animal and is in its own genus, you can read about it here - Meerkat Facts.

Most mongoose species are highly social animals living in busy groups of 6 to 40 individuals called "packs" or "mobs". Some particularly gregarious species like the Gambian mongoose may live in packs of 50 or more. These groups may be lead by an alpha male and female who are often the only two individuals who mate and reproduce.

Some mongoose species live in a cooperative society where each member of the pack has a specific job and subsequent duties. Some are hunters, some stay behind and "baby sit". In this system, older or infirmed members and youngsters are often nurtured by the entire pack, with kills being brought back to the home front and generally freely shared.

The mongoose is a small animal but an excellent hunter, with keen senses of smell, sight and hearing, and remarkable reflexes. They hunt insects and small animals such as mice, rats, rabbits, lizards and snakes, including one of the most dangerous creatures on Earth - the dreaded King cobra. They are largely immune to the venom of scorpions and snakes, although repeated stings or strikes may sicken and even kill them.

Mongooses are remarkably bright animals that have complex social structures and have even displayed simple tool use. Several species of mongoose routinely crack open eggs, nuts, or shelled creatures such as crabs or mollusks by dropping or throwing them on rocks. Some will raise up on their hind legs with the item in their forepaws and drop it on a stone. Others have been observed hunched over like a football center, launching objects between their legs against a large stone or tree. This behavior is observed and practiced by youngsters until perfected. - Mongoose Facts how does a mongoose kill a cobra? The mongoose is notorious for one fascinating fact - their astounding ability to battle and kill some of the deadliest creatures on Earth. Native to India, the King cobra is the largest venomous snake in the world, capable of reaching a length of 20 feet and a weight of over 35 pounds. A bite from a King cobra can kill an adult human being in less than 30 minutes.

In the wild, there are only 2 things a King cobra must fear, people and mongooses. The mongoose is a constantly active hunter and forager that eats a wide variety of small prey animals and loves snakes in particular. All species of mongoose eat snakes regularly, but the slender mongoose and the grey mongoose are the two species most likely to confront and devour a King cobra.

First, their habitats overlap, second, these mongooses are some of the largest species, and third, practice makes perfect. A confrontation between a mongoose and a cobra is not an everyday event, but it is not uncommon either. In general, the mongoose is the cobras only natural predator other than human beings.

King cobras actually eat other snakes as their main diet, as well as small animals like rats and birds. Many of the things they eat are larger than a typical mongoose, but the King cobra wants no part of the mongoose. The snake will try to avoid confrontation if it runs into a mongoose, but will stand its ground once cornered and defend itself if it can't get away. 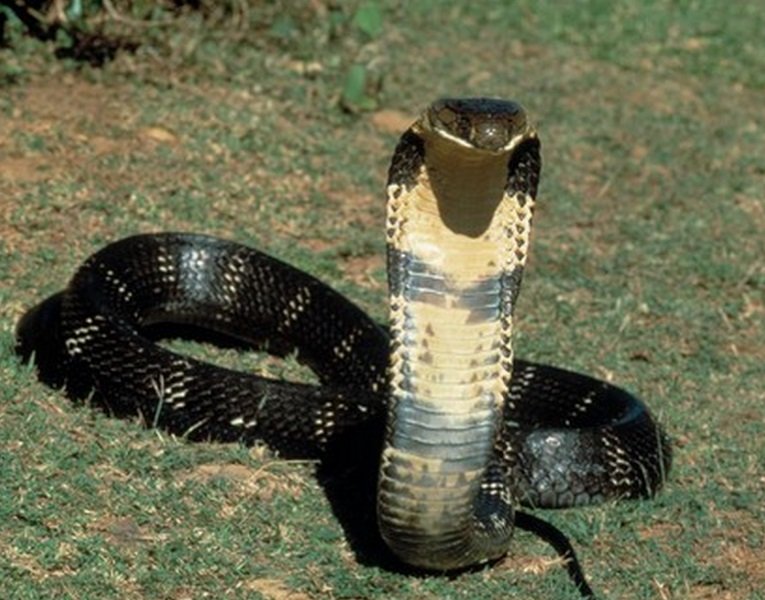 The mongoose is incredibly, blurringly swift and is capable of dodging the strikes of the also very swift cobra, but the mongoose also possesses something called acetylcholine receptors which make it , not fully immune, but relatively tolerant of cobra venom. When it makes its move, the mongoose leaps, teeth bared, directly for the head of the snake. If the mongoose grabs the snake correctly it will kill it by biting right into its skull.

The cobra may wrap around the mongoose but will usually succumb to the mongooses attack in a matter of moments  If the mongooses first leap is inaccurate, it may be bitten.

If the cobra bites the mongoose more than once, the mongoose may loose the battle and become the cobras dinner. It is thought that mongooses win about 75 to 80% of these encounters, and they will eat the cobra, venom sacs and all.

A king cobras venom is not poison, it is a modified saliva that must be injected into the victim in order to be lethal, so the mongoose is free to consume the entire body of its neutralized victim. - Mongoose Facts

some of the many mongoose species The numerous species of mongooses have many different lifestyles and reproductive strategies.

Some live in groups where only the alpha male and female will reproduce. In these packs the rest of the gang will help with the raising of just a few youngsters from this select breeding.

Other species live in larger colonies where the females have synchronized estrus cycles. All the females  will mate with the most dominant males and they will all give birth within hours of each other.

The babies will be raised by the entire colony, and when the members of these packs leave the den to forage, several "babysitters" will stay behind and mind the huge, communal litter of pups.

A few mongoose species are solitary animals with males and females only  coming together to mate once a year. With these species the male may stay to help raise the litter of 2 to 6 babies called pups, or the female may raise her pups alone.

In some mongoose societies, young pups beg all the adults in the pack for food but eventually choose one adult, called an "escort" who will provide that individual pup with food until the youngster can fend for itself at about 5 months old.

A baby mongoose spends most of its time playing and wrestling with litter mates while the adults in the pack forage. When an adult uncovers a beetle, digs up a millipede or snatches an egg, the pups forget about play and beg for a meal using high-pitched chirps like baby birds. Youngsters of most species remain with their family group for life. - Mongoose Facts One of the smallest mongoose species at only about 1 pound in weight, the yellow mongoose can be found in arid grasslands and semi-desert lowlands of Southern Africa.

The yellow mongoose has a very sharply featured and foxy face and a golden coat. They are sometimes referred to as red meerkats although both animals are in their own genus. The yellow mongoose lives in busy colonies and digs large and fairly elaborate dens with multiple rooms and tunnels. They often peacefully share their dens with ground squirrels. The colony will usually start the day by slowly emerging from their burrow and lounging about the entrance sunbathing and grooming each other. Then they will set off to forage for their favorite foods - big bugs.

Basically an insectivore, the yellow mongoose relishes scorpions, millipedes, beetles and roaches. Birds eggs, the occasional mouse or lizard and some unfortunate snakes round out the menu, but bugs are by far the bulk of their diet.

Yellow mongoose packs usually consist of an alpha male and female and assorted relatives. Youngsters are commonly cared for by the entire family, and older or less able individuals are often nurtured by the group as a whole, supplied with food, and protected by all the members of the pack. - Mongoose Facts 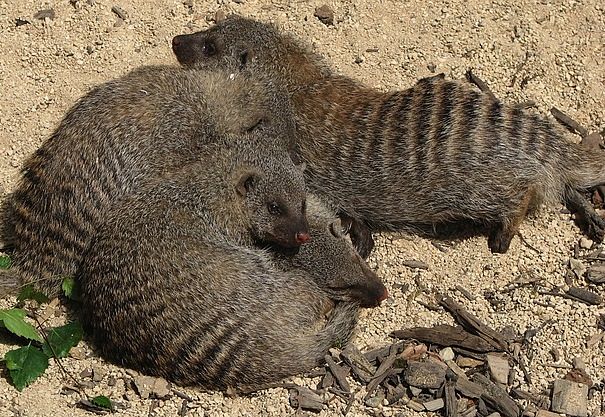 The banded mongoose is a medium sized species of mongoose weighing about 5 pounds. They live in big social groups with several dominant males who not only routinely mark their territory but also the other members in the group with their scent glands.

The banded mongoose has several very unique habits and has become famous for its interaction with other species of animals. Bandeds have been observed foraging with troops of chacma baboons and co-existing rather peacefully. Some baboons have been observed stroking and even holding mongooses as if they were pets. Mostly, the two species must find some safety in numbers as they forage.

In another interesting example of inter-species activity, banded mongooses have been regularly observed grooming warthogs. Individuals have been seen climbing on the backs of these potentially very dangerous animals and carefully removing ticks and other irritants.

This species of mongoose in particular, has shown amazing adaptive abilities, and their cooperation with other species is matched only by teamwork within their own pack.

If startled or threatened a pack of banded mongooses has a unique and unsettling defense mechanism. Sometimes referred to as "mobbing" the entire group will mass together in a tightly packed formation and charge their opponent as one. While charging they will scream, churl and holler, but most unnervingly they will rise up, sink down and writhe side to side creating the illusion of one single huge and convulsing animal.

Few foes will stand their ground against a well executed banded mongoose mobbing, and many a hyena, leopard or lion has been sent fleeing from the sight!   - Mongoose Facts The smallest of the mongoose species, the tiny dwarf mongoose is only 7 to 10 inches long and lives in social groups of up to 20 individuals. The dwarf mongoose pack moves about its large territory using numerous termite mounds, caves and tree hollows as shelters for a few days at a time. Termite mounds are a favorite, and they will renovate the structures to suit their needs, adding rooms and widening tunnels.

Like the banded mongoose, the dwarf mongoose has been seen collaborating with other species. They are often seen together with birds of the hornbill species, each creature benefiting from the others heightened senses and alerting each other of predators as they forage.  - Mongoose Facts