The giant panda is one of the world's eight species of true bears.

Although for a number of decades there was some controversy over whether the panda was actually a bear at all, the recent consensus is that the panda is, in fact, all bear.

.Some scientists argued that the giant panda and the red panda which share many characteristics were both more closely related to raccoons than bears. Closer study of the giant pandas molecular structure, however, puts them in the family ursidae - the true bears.

The panda dines almost exclusively on one type of plant material, bamboo, which makes up over 95% of its diet. On rare occasions pandas will consume other types of plants, small animals, or insects, but the bamboo diet is so dominant, and has been consumed by the panda for so many thousands of years, that it has evolved into a bamboo eating machine, and has even evolved special paws with bony "pseudo thumbs" for handling bamboo shoots.

The giant panda lives a solitary life and each individual marks, patrols and maintains its own territory. Giant pandas will actively avoid each other upon seeing or hearing another nearby, and females in particular will chase strangers out of their range and then actively and agitatedly re-mark the boundary lines with claw scratches, sprays of urine and strategic droppings.

Pandas will occasionally enter caves or hollowed out trees to sleep or den for a few days but do not have permanent living arrangements. They do not hibernate as some other bear species do, but they will make short migratory moves to warmer climates depending on the season.

Although not officially the national symbol of China, (the dragon is) the giant panda can be found on many Chinese coins and its likeness even appears on many of the nations official government documents.   -Giant Panda Facts With such a limited diet and such high dependence on the delicate ecosystem of the bamboo forests, the Giant Panda has been critically endangered for many decades, but vigorous efforts by the Chinese government have managed to maintain the wild population. The giant panda reaches sexual maturity at 4 to 7 years. The female ovulates once a year and there is only a 2 to 3 day period during which she can conceive.

The pair will only remain together a matter of days. The pregnancy will last about 4 1/2 months. The newborn baby panda is a writhing, red, hairless creature the size of a cell phone bearing very little resemblance to its mother.

With the exception of kangaroos and some other marsupials, a brand new baby panda is the smallest new-born in relation to it's mother's body - only about 1/1000th of her size! It is extremely difficult for the mother without the benefit of a marsupials pouch, to protect the precious offspring, and though twins are often born, perhaps in anticipation of difficulties in the early months of life, it is very rare that both siblings survive.

The giant panda, like all bears, has a very slow reproductive rate, so the survival of the remaining cub is critical, and panda mothers are vigilant parents who will defend their cub with great ferocity and fearlessness. Close and cuddly, the young giant panda will stay with its mother for about 3 years before heading out on its own.  - Giant Panda Facts

The red panda, sometimes referred to as the "lesser panda" or "firefox", was originally considered to be a type of raccoon.

More complex study of its gene structure has recently placed it in its own family, Ailuridae as the only member, although it is still classified within the super-family Musteloidea, a classification of animals that includes raccoons, but also skunks and ferrets.

what do pandas eat? All bears were true carnivores at one point in their evolution, but all bear species except the polar bear have turned to different diets to survive. Teeth in the back of the jaw that were once sharp cutting and tearing instruments developed into flat- molar type grinders to process once inedible materials.

The pandas switch to bamboo as the staple of its diet happened thousands of years ago for reasons one can only theorize, but it most probably saved it from extinction. Its teeth have slowly changed, and its stomach acids and saliva have evolved a new chemistry that breaks down the woody plants, but much of its body remains unchanged.

Because it originally evolved as a carnivore, the giant panda is now a meat-eater surviving by ingesting plants. The giant panda spends most of its waking hours eating bamboo, often in a fully reclined position.

They consume about 30 different species of bamboo so there is at least some variety in taste. And there are different edible parts of the plant as well. Giant pandas can be found munching on fresh new bamboo shoots in the spring, bitter green bamboo leaves in the summer, and tough and chewy bamboo stems in the winter.

Driven to consume as much as 50 pounds of raw bamboo a day to sustain it's massive body, but without the furnace-like stomach of a horse, cow or rhino to burn the limited nutrients that bamboo provides, the panda is a lethargic, slow-moving  animal, and even cubs are more likely to just tumble around on the ground than lift their bodies up into a run or a jump. Ultimately, the life of a giant panda has one giant theme: lie down and eat!  - Giant Panda Facts The panda dines almost exclusively on one type of plant material, bamboo, which makes up over 95% of the diet. However, if you look at the teeth,  stomach and digestive system of the panda, it would appear to be designed to consume a mostly meat diet. Large sharp teeth for tearing flesh, and the stomach chamber required to digest a deer, not a stalk of bamboo.

What evolutionary crossroad caused the panda to alter it's diet so drastically? We do know that this once carnivorous bear has been eating bamboo for so long that it evolved a small knob of bone at the perimeter of each paw that allows it to maneuver the sometimes unruly stalks of bamboo.

Called the "false thumb" or "pseudo thumb" it developed on the front paw which is large and flat with five digits all facing in the same direction- no opposable thumb. The knob is an extension of the small sesamoid bone in the wrist. Located at the bottom corner of the paw, opposite the five digits, it allows the panda to grasp slim bits of bamboo almost as if it had hands. Amazing! 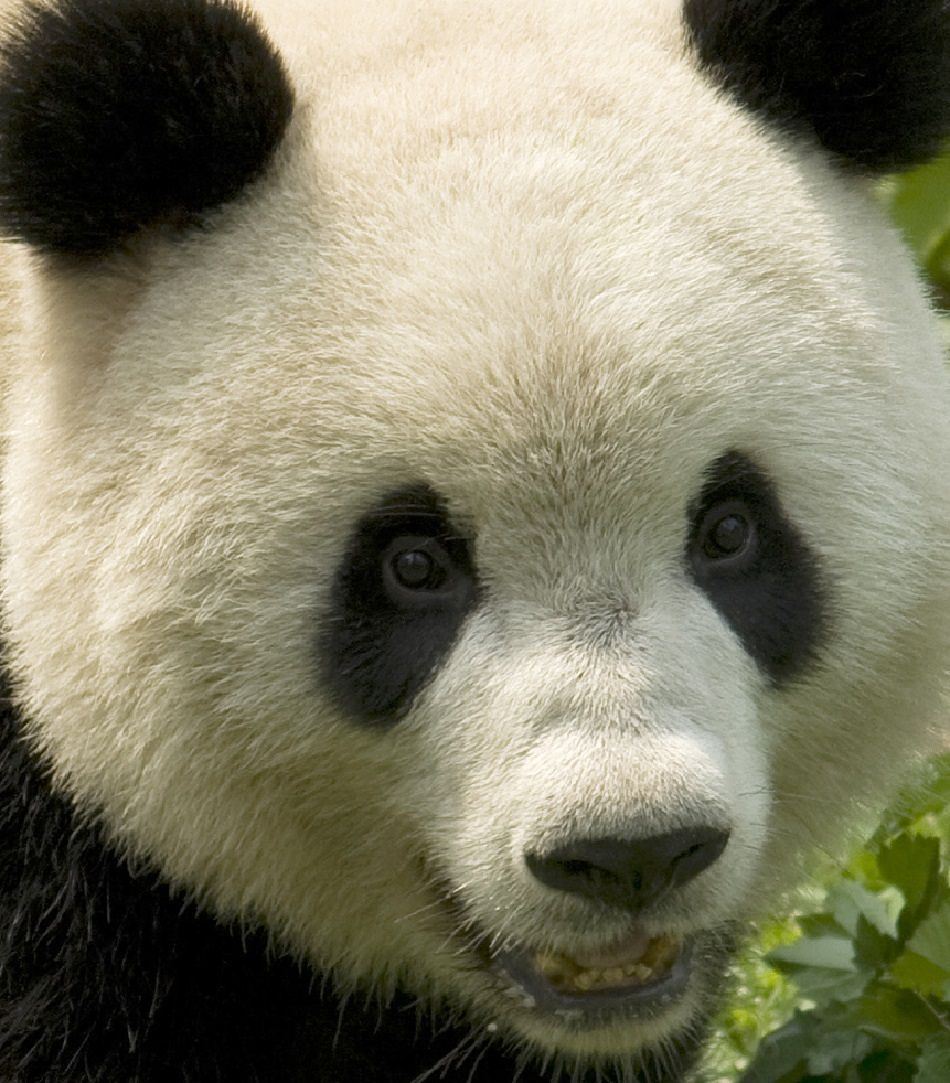