Portrait of a Howler Monkey

Monkeys, gibbons and apes are all primates, but belong in different families. The most obvious difference between monkeys and apes is that apes do not have tails.

A few isolated monkey species do not have tails either, but they are the exception rather than the rule.

The great apes, which are the human being, the orangutan, the gorilla, the chimpanzee and the bonobo, are much larger than monkeys and much more highly evolved.

The gibbon, which has many aspects of both monkeys and apes, is truly its own separate creature, although it is often lumped in with either apes or monkeys by virtue of many different arguments, both scientific and not so scientific.

We have separated the gibbons and offer their own article. We have also separated the baboon into it's own page because it is so well known, but the baboon is in fact an Old World monkey with the customary large size and non-prehensile tail..

Monkeys are highly intelligent and active primates that are broken into two groups known as Old World monkeys and New World monkeys.

The Old World monkeys (including baboons) inhabit Africa and Asia, and are more closely related to apes. They are generally larger than New World monkeys, have more elongated faces, and have a tail that is not "prehensile".

The prehensile tail is slim, muscular and very long, usually longer than the body length, and can easily support the weight of the entire monkey. These tails often have a patch of bare rough skin called a tactile pad or friction pad, that helps in grasping objects.

While the tail is used primarily to assist in climbing and keeping the hands free for foraging and carrying, some monkey species will use it almost as an extra hand to hold and manipulate food items.

The Old World baboons are the largest of the monkeys with males reaching almost 4 feet long and weighing nearly 80 pounds. The tiny pygmy marmosets of the New World rain forests are the smallest monkeys and can be as tiny as 4 inches and 4 ounces! 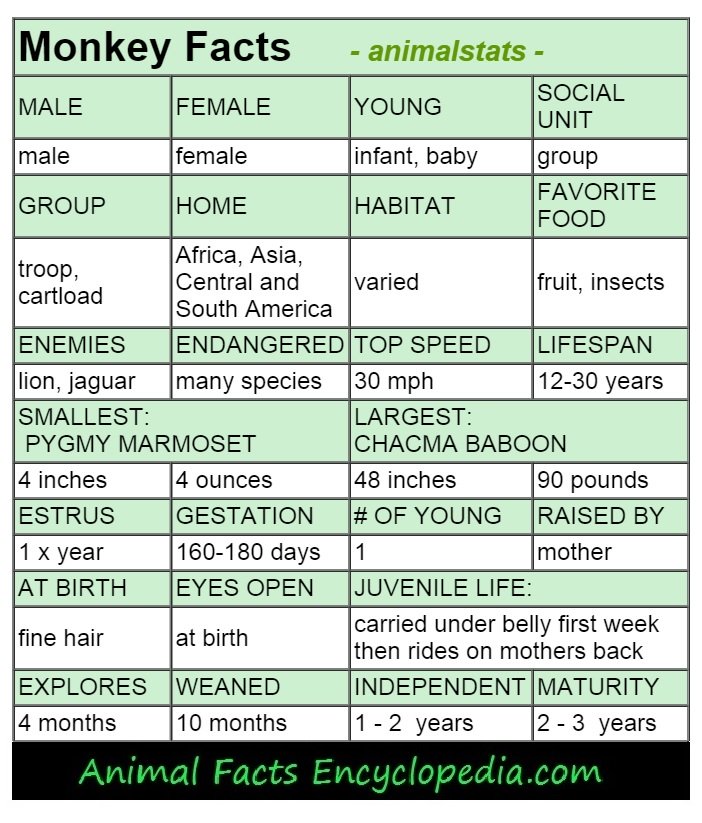 of monkey hands and tails The most dexterous tail in the monkey kingdom belongs to the spider monkey. These monkeys can hold, carry and even catch items with their tails, and will gesture with them as well.

There is a small bare area of rough skin on the underside of the last vertebra in the tail. This "tactile pad" has many nerve endings like a fingertip, which aids in delicate tasks like peeling a banana.

The prehensile tail is surely a product of the New World monkeys densely forested environment. Most New World monkeys are largely arboreal, spending the majority of their time high in the forest canopy, and some never leave the trees at all.

While many Old World monkeys like the baboons, spend most of their time on the ground walking around on all fours like a dog.

Another area of monkey anatomy that shows some variety is the hand. All of the great apes have opposable thumbs meaning that the thumb can be swiveled around so that the pad of the thumb faces the pads of the fingers and can be brought together in a "pincer" grip.

Likewise, all of the Old World monkeys have opposable thumbs.

But many New World monkeys, including marmosets, spider monkeys and capuchins do not have opposable thumbs.

The New World monkeys life high in the trees no doubt plays a part. Using all five digits together to encircle a branch with more of a cupping motion rather than grasping, seems more effective when speed and mobility are of the essence.

With a tail that is able to help as well as its hands, the spider monkey swings from limb to limb with incredible ease, and with a thumb that is always in harmony with the rest of the hand. Naturally the mating habits of 260 different species of monkeys will present some variety.

There are some monkeys, like the proboscis, that live in groups with one male and a harem of females. Bachelor males may live either in small groups, or completely alone. Proboscis are similar to lions in that when a new male displaces the dominant male, he may kill the existing infants.

This is not the typical monkey lifestyle however. Most monkeys live in social groups from 5 to 30 individuals, and separate into pairs for a few days while mating takes place.

Often there is a change that signals both the males and females readiness to mate, including swelling of the genitals, and reddening of both the genitals and sometimes the face.

Females may mate with several males and usually give birth alone.

Some species, like macaques and baboons, give birth on the ground, but many others make nests up in the trees.

One infant is standard, and the baby will be held close to the chest for a few hours to up to two weeks before they graduate to riding on the mothers back.

Infant monkeys live exclusively on mothers milk for as many as three months, but even after starting solid food, they will continue to nurse for up to a year.

In some species, there is some mild cooperation within the group in the rearing of young, but the mother is mostly responsible, and most male monkeys do not treat their own offspring with any special interest.

Young monkeys are agile, active and incredibly curious. The most advanced monkey species have their own culture, including greatly varied "accents" to their vocalizations, even from troop to troop of the same species.

Little ones are taught social codes, local ways to gather and handle food, hunting techniques, seasonality of fruits and nuts, the safest places to sleep and eat.

Like humans and apes, monkeys have been seen to demonstrate actions in order to teach young ones. In one such instance a mother macaque was observed repeatedly washing a piece of fruit until the toddler caught on and began dipping his own lunch in the river. - Amazing Monkey Facts

the many faces of monkeys

There are over 260 known species of monkeys, all of whom display their own distinct look. Colors and patterns, Mohawks and mono-brows, variations in eye shape, skull, nostril, and ear structure, bare skin to fur ratios, and overall proportions produce a slide show of differences unrivaled by any other animal group. Forward facing eyes and color vision no doubt played a part in the development of so many wonderful mugs! - Monkey Facts. The marmoset genus is made up of 22 species of New World monkeys including the worlds smallest monkey, the pygmy marmoset. There are 16 species within the tamarin genus.

Marmosets and tamarins differ in jaw shape and skull construction but otherwise have a very similar appearance and lifestyle. They are the smallest monkey species and differ from other monkey families in several ways.

Their teeth are specially designed to strip open the bark of trees exposing the sap inside. Some marmoset species may get up to 70% of their diet from tree sap. Otherwise they will eat insects, birds eggs, flowers and fruits.

Marmosets and tamarins have more primitive brains than other monkeys, and they have claws on their hands and feet as opposed to the flat nails that other monkeys and apes have.

These beautiful little monkeys have an amazing variety of face and head decorations, from the flowing red locks of the Golden Lion tamarin, to the feather like extensions of the cotton eared marmoset, to the outrageous mustache of the emperor tamarin.

These monkeys almost always give birth to twins. Double adorable! The tremendous variety of monkey species lead to differing lifestyles, habits and appearance.

Many New World monkeys are largely arboreal and some, like the marmosets and Tamarins may spend their entire lives in trees, never touching the ground.

The largest of the Old World monkeys the baboons, have a completely different experience. Living similiar to a pack animal, moving in fairly large groups on the ground, walking usually on all fours.

They are still good climbers and will hunt small prey and gather fruits in the trees, but also scavenge around on the ground like dogs might, with their noses low to the ground.

Many of the Old World monkeys are built for life on the ground, with stronger, wider and more developed lower bodies, while the New World spider monkeys have tiny hips and legs as thin as their arms.

Most Old World monkey species sit down fully on their buttocks much as humans do when resting and eating giving them a sort of "little old man" quality, while the New World monkeys rest on flexed haunches, more like a cat.

While the majority of monkey species are diurnal - out and about by day- there is an entire family of New World monkeys known as "night monkeys" eleven nocturnal species who have large forward facing round eyes like an owl for night vision.

Equally diverse are the temperatures and habitats monkeys may be found in. Many monkeys naturally live in hot - even sweltering- desert or rain forest environments, but there are some species that live in ice and snow like Japans amazing macaques.

These monkeys range farther North than any primate species living in the highlands of central Japan where the snowfall is extensive. Also known as snow monkeys, they are known for bathing in the hot springs there, grooming each other meticulously while soaking up to their necks .