Portrait of an American Badger

One of the more curious badger facts is that a large part of their diet is earthworms. Badgers are stoutly built, powerful and cantankerous carnivores. There are eight species of badger ranging across several continents including North America, Africa, Europe and Asia.

All the badger species are fossorial, creating many-chambered underground dens, and spending much of their lives below ground.

Badgers do allot of stalking at night, but are seen out and about in the daytime as well. They are excellent hunters of earth-dwelling prey including rabbits, groundhogs, ground squirrels, mice and snakes.

Some of these animals can be fairly large in comparison to the badger, but are no match for this enormously aggressive predator.

The badgers sense of smell is very powerful and they can detect an animal in its burrow through soil as well as snow cover. When they locate their prey, they dig rapidly directly down into the animals den in a devastating surprise attack from above.

Badgers also eat a variety of insects, grubs and vegetable matter including fruits and roots.

The word "badger" comes from the French word "becheur" meaning "digger" and is extremely appropriate. Everything about a badgers body says "dig". It has massive, shovel-like front paws with five powerful toes, each tipped with curved claws as strong as steel. They can move yards of dirt in minutes, barreling in head first with long digging strokes of the front legs and quick, earth-moving shoves backwards with the rear legs.

The rear paws and claws are smaller and designed to doze away the soil that has already been loosened and dislodged by the front feet.

Badgers have a third eyelid that protects their eyes from all the flying soil, and thick guard hairs in their nostrils and ears to keep them clear of debris.

A badger being pursued by a large predator such as a wolf or mountain lion can dig backwards, fangs facing out for protection and disappear beneath the soil in a matter of seconds.

In addition, the badger has very thick fur and loose skin which allows it to twist around, even when having been grabbed from behind by a predator, to defend itself with its impressive canines.

Most badgers live solitary lives once weaned from their mother, but have overlapping territories and may occasionally run into each other and socialize.. - Badger Facts The American badger is a fixture across the plains and woodlands of the central United States. They range into Canada and Mexico as well, but the midwestern plains are their most common residence.

These badgers have a flattened appearance with a remarkably broad torso, short, powerful limbs, and massive front paws and claws. They have a grizzled grey body with whiter undersides and dark brown or black legs. The stripe down the center of the face is narrow compared to the European badger, and the skull and cheeks are wider with low-set ears and black cheek patches. And badgers have stout tails of a few inches in length.

The jaw of the American badger sets into the skull in a unique notch that locks it to the upper mandible and makes it impossible to be dislocated.

Many of the animals the badger hunts are powerfully built diggers as well, such as the muscular groundhog and rugged prairie dog, who will wedge their sturdy legs against the walls of their dens trying to avoid extraction. The specialized jaw, along with the badgers stout neck and shoulders helps the badger to dislodge its quarry.

The American badger has numerous potential enemies on the Western plains, such as mountain lions, wolves and the ever annoying coyote.

These animals may out weigh a badger by three or four to one, but an adult badger is as fierce a combatant as one may encounter and more often than not, sends its agitator running for the hills.  - Badger Facts The European badger is also known as the Old World badger and the Eurasian badger.As these names imply, it ranges throughout most of Europe and some parts of Western Asia.

The European badger has a more elongated head, a much wider white stripe down the center of the face, and appears slightly more upright than the American badger, which tends to have a somewhat "flattened" look.

Although a solitary animal in much of its range, the European badgers of Britain and some other territories are the most social of the badger species and live in groups of 5 to 20 individuals in enormous dens that may have up to thirty different chambers and 1/2 a mile of tunnels.

Some of these burrows called "setts" are decades old and are occasionally shared by other animals including red foxes and even raccoons.

European badgers also tend to travel on well-worn trails, some of which have been in use for hundreds of years.

This is the largest of the badger species reaching as much as 40 pounds in the late summer as it fattens up for a potentially hard winter.

Badgers do not hibernate, but will enter a state known as torpor if the weather gets rough and snows are too deep to hunt.

Torpor is a deep sleep that may lasts for up to three weeks but does not involve the extreme slowing of heartbeat that actual hibernation involves.

The European badger is slightly less aggressive then the other badger species and does not take prey quite as large as the other badgers, actually spending long hours digging for their favorite food- earthworms. - Badger Facts 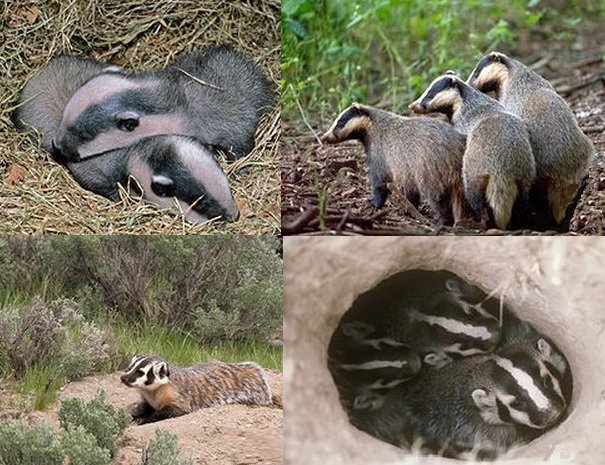 Badgers come together to mate in the late summer and early autumn and both males and females may mate with multiple partners. Once the female is impregnated, the development of the embryos is delayed over the winter, so that the baby badgers arrive when the weather is right. The eggs don't fully attach to the uterus until early spring. This is a process known as "delayed implantation", and is one of the more unusual badger facts.

In late winter or early spring, the eggs become implanted in the uteran wall and begin to develop. Although the entire pregnancy takes about 7 months from fertilization to delivery, the eggs do not develop at all for the first 5 months, and then, once implanted, take about 6 weeks to fully grow.

Females give birth deep inside their burrows to 2 to 5 baby badgers.  The newborn badger babies are called cubs. They are blind and only very finely furred, and completely dependent on their mother.

She may leave every few days to hunt, but returns quickly. The mother badger may change dens once or twice during these critical weeks to ensure the safety of her family.

She carries each badger cub one at a time to the new sette. Baby badgers mature quickly and begin chewing on kills their mother provides for them, sometimes even before their eyes are open.

By the time they are 4 months old, a baby badger can hunt for themselves and they head out on their own at about 6 months old. - Badger Facts

The honey badger or ratel The honey badger is in a separate genus from the American and European badgers, and is actually more closely related to wolverines and weasels.

Nevertheless, the honey badger is exceedingly "badger-like", and has a reputation for being one of the most fearless and relentless animals on Earth. 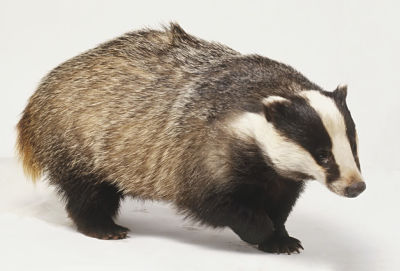