Portrait of a Giant Anteater

The anteaters are four species of unusual creatures with extraordinarily specialized tongues, mouths and stomachs. Created with insect consumption in mind, the anteater has a toothless, tube-shaped mouth and an extremely elongated head that houses the animal worlds most elaborate tongue.

The tongue actually rolls up at the back of the anteaters cranium and is attached to the sternum. When fully extended, an anteaters tongue is almost two times the length of the entire head.

The tongue is thin, sometimes bright red in color, and covered with hundreds of little hooks. These hooks, along with copious amounts of sticky saliva, capture tiny insects and deliver them straight down the throat without chewing.

Once inside the stomach, hundreds of ants, termites and other insects are crushed by a powerful and ever churning gizzard. Like birds, anteaters intentionally ingest fine gravel and small pebbles, which line the gizzard and help demolish the food.

Most closely related to sloths and also, not surprisingly, armadillos, anteaters are rather primitive animals with a simple, mostly solitary lifestyle.

Although they all survive almost exclusively on insects, each species has different ways of acquiring their meals.

The rarely seen silky anteater, native to Central and South America, is an arboreal animal, spending its life in the mid-range tree line, and rarely walking on the ground.

The medium-size tamandua, or collared anteaters, from South America, move freely from the trees to the forest floor.

Also native to Central and South America, the massive and fascinating giant anteater is terrestrial and spends its time exclusively on the ground, foraging through termite mounds and anthills. - Anteater Facts The giant anteater is the largest insectivore on earth, with males reaching an impressive 120 pounds at maturity.

Supporting such mass in ant-sized increments is hard work. The giant anteater is diurnal, out and about in the heat of the day, sleeping at night, and spending most of its time using its impressive sense of smell to find ant hills and termite mounds.

The anteater acts fast when it finds a mound, ripping straight through the walls with its huge and powerful claws.

Moving quickly is key because, although the anteater is covered with thick, mop-like fur, it is not immune to the stings and bites of ants and termites.

The giant anteater will eat as rapidly as possible, its amazing tongue moving in and out 150 times a minute- more than twice a second! And then it's off to the next mound.

Scientists theorize that the anteater is such an efficient hunter that if it wasn't bothered by stings it would end up wiping out entire mounds.

As it is, with attacks of only a few minutes in length, the insect colony can rebuild and go on to provide the next anteater with a three minute feast. -  Anteater Facts If individuals run into each other it is usually uneventful, but they rarely socialize.

Once a year in mating season they come together in pairs and will stay together for a few days. The male will sometimes remain for awhile longer, but generally the pup is raised by its mother only.

Do to her unique structure, a mother anteater can't carry her baby in her mouth, or lift it in her arms, so when it's time to shove off, he baby anteater instinctively crawls on top of its mother, and is carried on her back for the first part of its life.

The mother will lay down and scoop the baby beneath her where it will nurse for up to an hour at a time, getting all of its nutrients from mothers milk for the first four weeks.

At about a month old the baby will begin exploring and walking short distances on its own, but the mother will carry its baby for about a year in most cases, which makes for quite the load.

Anteaters are quiet and uncomplicated. The baby may emit some squeals and contented sounds when nursing, but otherwise communication is silent.

Young anteaters may hang around mom for about three years before branching out on their own - afterall, It's tough to leave such a tireless mommy. - Anteater Facts There are four species of anteaters, all residing in Central or South America.

The most recognizable species is the giant anteater. It is quite large, does not live in trees, resides in more arrid areas than the other species, and is the only anteater without a prehensile tail.

They will rip open ant and termite mounds on the ground, but also find a wide variety of insects in the trees, and will slither their tongues into crevices in tree trunks to extract their meals.

The tamanduas are most recognized for their tendency to threat displays, where they raise up on their hind legs and puff their chests out.

The most rare and unusual of the anteaters is the silky anteater, also known as the pygmy, or dwarf anteater. It is in a separate genus from the other three species and has a much different appearance.

Silky anteaters are covered with woolly, cream-colored fur. The silky is almost exclusively arboreal and rarely leaves the trees. It is nocturnal and so is not seen often. It is very shy and almost completely silent.

The silky anteater has a much shorter face and tongue and eats a slightly different diet of grubs and worms, in addition, of course, to ants.

It does not leave the trees to rip open termite mounds. The silky anteater is believed to have a very small territory of only a few trees and is not nearly as active as the other anteater species.

It has a remarkably long and powerful prehensile tail and may dangle upside down from a high limb by its tail, while dining on insects on a lower branch. Silkys are also the smallest anteater species at only about 10 inches long and one pound in weight. - Anteater Facts The generally passive and good-natured anteater looks almost cuddly with its bushy hair-doo, but can put on a rather fierce show when push comes to shove.

Smaller anteaters can fall prey to jaguars, cougars, pythons, boas, eagles and wolves, so they must be on the alert.

When a predator approaches, the anteaters will put on a boisterous display, standing high up on their hind legs using their strong tails as a tri-pod and arching their backs. They will hold their arms out wide, large claws exposed, in an attempt to look as large as possible.

If the bluff fails, they will try to grasp their attacker in a bear-hug. They are not well-equipped for battle having no teeth, but their front limbs are powerful, being designed for hours of strenuous digging, and if they can latch their claws into a foe, they can possibly deter an attack.

There have been rare occasions where Giant anteaters have been reported to have killed animals as large as  jaguars in self defense. The bluff works well and is employed often, particularly by the tamandua species. They are so likely to display in this fashion, that even captive individuals in zoos will regularly flash their handlers just to be left alone -Anteater Facts 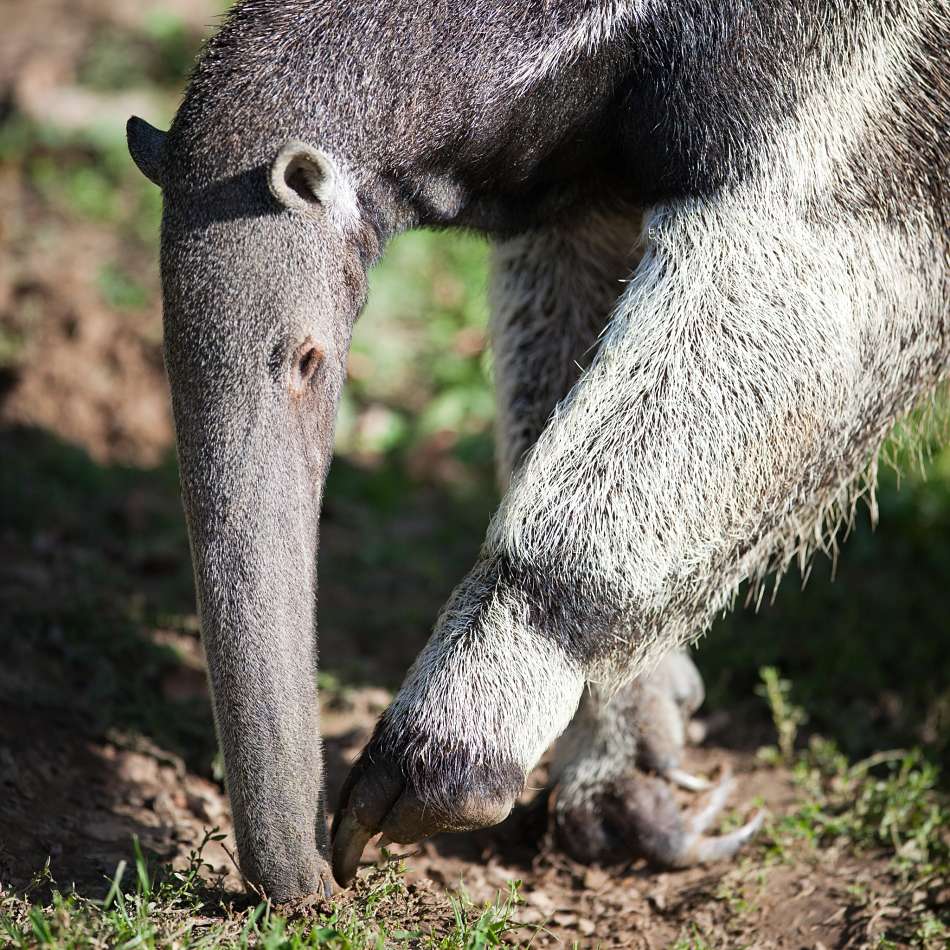