Portrait of a Syrian Hamster

The Syrian hamster is a lovely little rodent that can become quite tame, friendly and affectionate.

Also known as the golden hamster, the Syrian hamster is 5 to 7 inches long, and weighs between 4 and 8 ounces.

Native to Syria and Turkey, wild Syrian hamsters are a golden brown color with cream or white undersides.

This coloring is found in many domestic hamsters today, along with a wide assortment of new colors and patterns, some the result of careful breeding.

Domestic Syrian hamsters may be solid white, black or red, pied with white patches, or dilute shades of blue and grey.

Attempts have been made to create a hamster with perfect panda markings, but it appears to be genetically tricky to produce the white face along with the solid black portions.

Long-haired Syrian hamsters have been bred with great success of course, and are called "teddy bear" hamsters.

A trademark of teddy bear hamsters is a long skirt of fur on either side of the little tail.

Male teddy bear hamsters tend to be much more fuzzy than females.

The Syrian hamster in the wild lives in arid areas where they dig burrows deep underground. 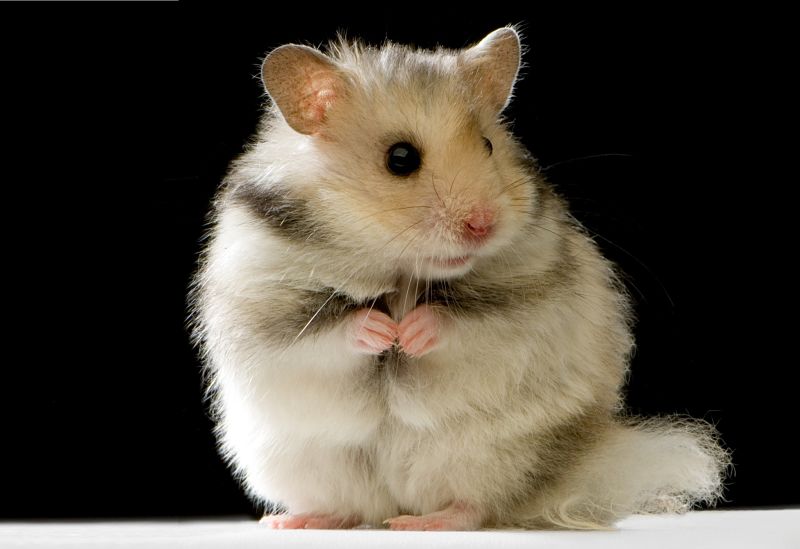 Hamster burrows can be 10 feet deep, with several chambers.

One chamber is a dedicated toilet area, and this natural tendency makes pet hamsters one of the cleanest pet rodents.

Syrian hamster cages stay relatively odor-free because they will choose one corner of their enclosure to relieve themselves in.

In addition, being a desert dweller, Syrian hamsters don't drink much water, and thus produce very little urine compared to some small animals that come from a forest habitat like mice, rats and rabbits.

Tame-ability is another reason why golden hamsters became such common pets.

When they were first used in the 1930's for scientific research, lab workers quickly made pets of them, and their popularity grew.

Today, the Syrian hamster is endangered in it's native habitat, and it is thought that less than 5,000 exist in the wild.

But the species has an estimated domestic population of about 6 million individuals kept as pets worldwide.

Syrian hamsters are solitary animals and do not tolerate company.

They do, however, enjoy interaction with humans, and become curious, friendly, affectionate pets.

Millions of dollars are spent each year by hamster owners as they purchase elaborate cages, toys and treats for their tiny companions.

Ultimately, the only downside to having a pet Syrian hamster, other than possibly being kept up at night, is their relatively short 2 to 3 year lifespan. Their are about 19 different species of hamsters, of which the Syrian is one of the largest.

All hamsters have specially designed "cheek pouches" to store and carry food.

The cheek pouches are pockets of skin that span from the mouth all the way down the side of the body to the hips.

Hamster cheeks can be filled with enough items to equal their own body weight.

They will hoard not just food like seeds and fruit, but bedding material as well.

To empty their cheek pouches the hamster pushes from the outside with its paws and the inside with its tongue. 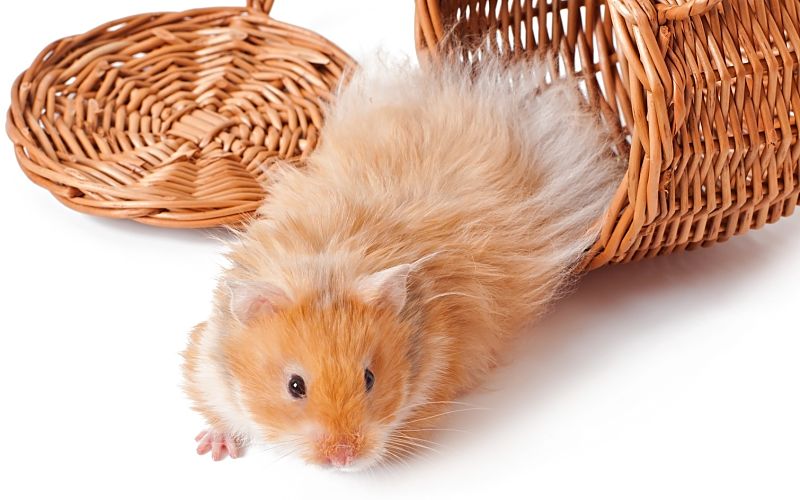