Portrait of a Rabbit

The rabbit is one of the most recognizable and well-loved creatures in the animal kingdom. Domesticated for thousands of years, rabbits are bred for their meat, their fur, and of course, for companionship.

There are an estimated 14 million pet rabbits in the world, many of whom live in the classic outdoor wood and chicken-wire hutch, some living in indoor cages, and some clever bunnies learning to use a litter pan and getting the run of the house.

Rabbits are beautiful little animals with many endearing features. They have slender, thin-skinned, towering ears that, in hares, can be 3 times the length of the skull.

The ears are amazingly expressive. They can move independently, swivel in almost any direction and can be held erect or folded flat back against the shoulders.

When at ease, rabbits move about in soft little two-beat hops, grazing on vegetation and grooming themselves, cleaning limbs, backs, ears and toes with their short pink tongues.

They commonly raise up on their hind legs to inspect their environment, reach tall flowers and leaves, and clean their front paws and faces with the same motions that a house cat uses, except with two paws at the same time.

Rabbits have ever quivering noses, long expressive whiskers, and a powder puff for a tail. Although both rodents and rabbits are small, furry and buck-toothed, rabbits are not in the rodent family.

Rabbits and hares are approximately 50 different species of small herbivorous mammals in the family Leporidae. They are from an order known as lagamorphs, which also includes little mountain-dwelling animals called pikas.

There are several major skeletal and systemic differences between lagamorphs and rodents. Lagamorphs have an extra pair of small flat teeth known as "peg teeth" in their top jaw, directly behind their incisors.

an assortment of domestic rabbits

Lagamorphs are basically exclusively vegetarian, while most rodents are opportunity feeders, happily dining on meat whenever it is available.

Male lagamorphs lack the penile bone that rodents have, and the overall design of the male genitals is different.

Rabbits are found around the world in a variety of environments, but most are woodland creatures who are classically known for living in a burrow - usually a self-dug hole several feet deep with multiple rooms and tunnels known as a "warren".

Finally, rabbits in the wild eat grasses as a dietary mainstay. They will eat many types of vegetation when available, but rarely consume root vegetables like the famous carrots of Bugs Bunny lore. In fact, carrots fed too liberally can actually cause tooth decay in pet rabbits.

Speaking of Bugs Bunny, the term "bunny" formally refers to a juvenile rabbit, but is often used informally to describe any rabbit, and sometimes in conjunction with the term rabbit as in "bunny-rabbit". which is similar to calling a cat a kitty-cat, or your 90 pound Lab a "puppy-dog" - it's all good. - Rabbit Facts All domestic rabbits are descendants of the European wild rabbit. First farmed in outdoor pens, and possibly barns, by the Romans around 200 years B.C., the European rabbit became a popular and easy source of superior meat and fur.

Catholic monks living in the Champagne region of France  conscientiously and selectively bred, housed, and thus domesticated the European rabbit between 500 and 600 A.D.

It is said that some forms of rabbit meat were declared to be fish and were acceptable to eat during Lent, which served as continued motivation for the Monks.

A few hundred years later, rabbits were being line bred throughout most of Europe. Different regions began to develop specific breeds, and the size, color, and disposition of the animals evolved and expanded over time.

The Dutch rabbit, one of the most popular and recognizable breeds of pet rabbit in modern society, can be seen depicted in artwork beginning  in the 1400's..

Today, the American Rabbit Breeders Association, or ARBA,  has over 30,000 members and recognizes 45 different breeds of rabbit.  Worldwide there are approximately 80 recognized breeds of domestic rabbit, each with its own contribution and traits, from massive New Zealand Giants, regularly considered the finest animals for meat, to the plush coated Rex breeds that are favorites for fur production, to dainty Netherland dwarfs, bred purely for companionship.

Rabbit meat is one of the leanest meats available, with far less fat than beef, pork or chicken. The entire rabbit is considered to be white meat. The rabbit is so lean, in fact, that it is a bit less tasty than other types of meat, and although the reproduction rate of a single doe may lead to her producing up to 200 pounds of rabbit meat in a single year, the meat itself is an acquired taste.

Today's domestic rabbit is an entirely different animal from the creature that was first captured and corralled in Ancient Rome. So different, in fact, that it is no longer physicallly capable of reproducing with the European wild rabbit it was derived from. - Rabbit Facts

the wild rabbits - what is the difference between a rabbit and a hare? The lagamorphs are dozens of species of highly successful small mammals that live all around the world in various environments. There are two families in this order of animals. Rabbits and hares are in the family leporidae, pikas which are smaller and rounder bodied than rabbits with shorter limbs and ears and no tail, are in the family ochotonidae.

The rabbit is in a separate genus from the hare, but the differences between the two animals are not obvious or plain to see. In general, hares are larger than rabbits with longer limbs and ears, but many species of hares are remarkably similar in appearance to rabbits.

Adding to confusion is the fact that probably the most "hare-like" example of a hare - the black-tailed jackrabbit- is actually inaccurately called a "rabbit".

There are, however, substantial differences between rabbits and hares, and their separation by genus is not controversial.

Newborn hares on the other hand, not only have their eyes open, they are fully furred and can actually begin foraging and eating solid foods within hours of birth and can survive completely on their own within a few hours of being born.

Once out and about, hares and rabbits live surprisingly different lifestyles too.

Rabbits are social creatures living in family units of up to 20 individuals. They dig large, communal homes underground called warrens, where they spend most of their daylight hours, and they eat soft vegetation like grasses and flowers.

Hares are generally solitary animals only coming together for mating. They do not dig warrens, but live above ground their whole lives. Hares have tougher digestive systems, and many live in very harsh environments where they must eat difficult to forage foods that are hard to chew and digest like bark and twigs.

Finally, many species of hares molt their fur to change colors with the seasons. Rabbits remain the same color all year round, regardless of any changes in weather or environment.

rabbit reproduction - how can rabbits have so many babies? Rabbits have long been used as symbols of fertility and sexual vigor in many societies. It is mathematically possible for a single pair of rabbits to multiply to about 1300 individuals in the span of just one calendar year.

Why and how does the rabbit reproduce at such an amazing rate? Well the why may be because rabbits are very popular food source for a large variety of predators.

A wild rabbit has a life expectancy of less than 3 years, simply because it is hunted by every predator in its habitat.

And even animals smaller in size and weight than mature rabbits and hares, such as house cats and sparrow hawks will regularly take them, because they offer little defense other than fleeing.

So for a bunny, reproducing before you get eaten is the number one plan, and nature has designed the rabbit with several physical characteristic to help with that goal.

First, female rabbits do not have a "season" as most mammals do. The female is receptive to the males advances as long as she has unfertilized eggs available, which is about 26 days out of every month. The females hormones are triggered by the act of intercourse, and she ovulates about 10 hours after copulating, so the eggs are released only when sperm are present, and impregnation is virtually guaranteed with a single mating.

Second, while hare newborns are almost completely self sufficient the day they are born, rabbits catch up quickly, remaining helpless for the first few days but becoming completely independent and fully weaned at only 4 to 5 weeks. (some variation, of course, between species)

Next, young rabbits and hares are ready, and often do, mate at as young as 4 months old. Once pregnant, the gestation is a relatively short 29-33 days. Litter size is not extreme compared to many other species - including many  breeds of dogs - with a typical litter size of 5 or 6 kits, but some other factors like the speed of development, make up for, and may be the reason for this.

Within 2 to 4 days of giving birth, a female rabbit may be receptive to an interested male, and become impregnated again. So it is actually conceivable for one female rabbit to become pregnant every 35 days and deliver up to 10 kits in each litter in the course of 1 year.

Throw in the idea that the youngsters from her first litter may begin mating at 1 month old, and so on and so on, and you end up with many, many rabbits.

Some animals, particularly some rodents, have shorter pregnancies, larger litter sizes, and even quicker weaning times, but the combination of all these factors in the rabbit, along with a very strong reproductive drive, gives you the most prolific mammal in the animal kingdom.  - Rabbit Facts Rabbits make lovely pets, and have been diligently bred for attractiveness and personality since the 1400's.

Some modern breeds are so petite that they may be kept happily in a simple hutch indoors, not unlike one might keep a hamster or gerbil. The Netherland dwarf, Dutch, Mini-lop and Angora bunnies are the most popular modern breeds, but there are literally dozens of fine choices for an indoor or outdoor companion.

Some rabbits pets aren't confined at all, but are given the run of the house once some rabbit-proofing is done to discourage the chewing of furniture and electrical cords. Since the rabbit is a den animal in the wild, its natural tendency is to eliminate in the same place all the time, which facilitates litter-pan training. Of course healthy rabbit feces are relatively dry and pellet-like,so an accident is rarely an issue.

The main drawback to rabbits being kept indoors is the odor of wet litter. Rabbits drink lots of water and produce dark, potentially strong-smelling urine, so pans and cages must be cleaned regularly. Male rabbits will occasionally spray urine, similar to male cats, which can be a huge problem.

Spaying or neutering your pet rabbit is an excellent idea and can eliminate potential issues. Spayed and neutered rabbits are less likely to develop bad toilet habits, have milder smelling urine and feces, will be more gentle and less anxious, and can't reproduce, so you will not be overrun with bunnies if you happen to have a pair.

It has been calculated that, do to the rabbits amazing reproductive gifts, if a single pair of healthy rabbits and all of their offspring are left to breed freely, they can expand to 1300 individual rabbits within just one years time! That's allot of rabbits!.

Check out just a few of the most popular rabbit breeds kept as companions right here... 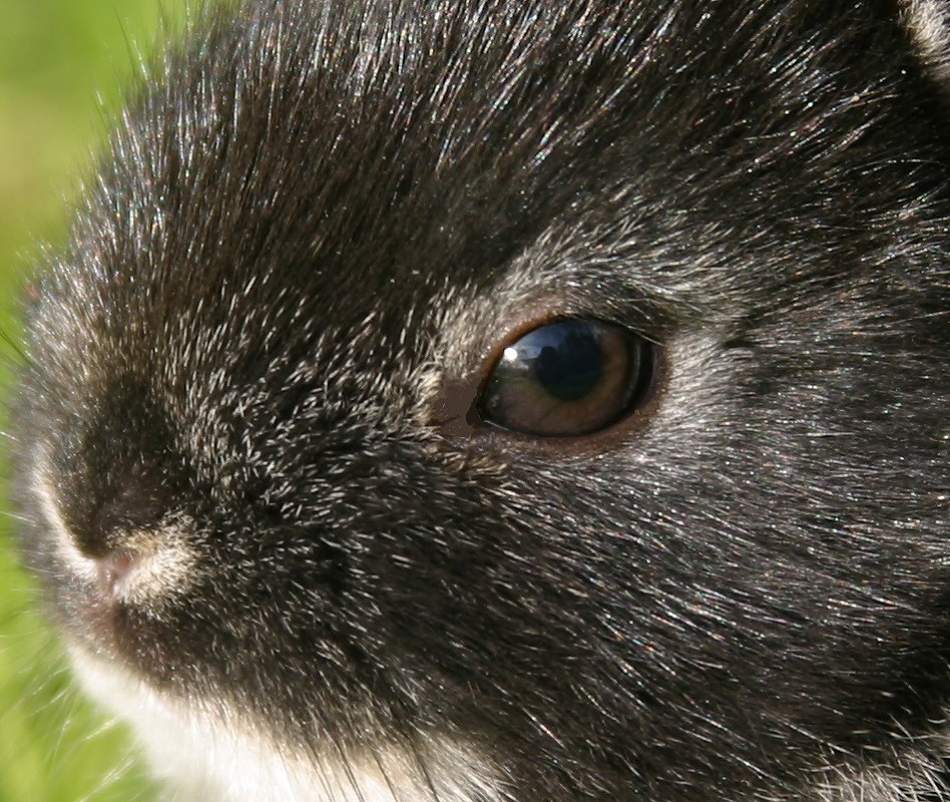