Portrait of a Grizzly Bear

The grizzly bear is a subspecies of brown bear native to North West North America. Although all brown bears in the region are regularly referred to as grizzly bears, it is the subspecies "arctos horribilis" that is the true grizzly.

Grizzly bears get their name from the "grizzled" appearance of their fur. Each hair is lighter at the tip than at the base and gives a variegated look. Grizzlies are also called "silver-tips" for this reason.

While that is the meaning of the bears common name, its scientific name, "horribilis", refers to the supposed grisly (or horrible) nature of the animal.

There are numerous subspecies of brown bear which has the widest distribution of any of the eight bear species. They live in forested northern regions of North America, Europe and Asia, and can vary widely in size depending on regional availability of food, climate, and habitat.

The largest of the brown bears is the Alaskan Kodiak bear. These enormous creatures often top 1,600 pounds and are as big as polar bears. The Kodiak and the polar bear are the two largest land carnivores in the world.

The grizzly subspecies, also native to North America, averages 5% to 8% smaller than the Kodiak in size.

The smallest of the brown bear subspecies is the Eurasian bear, the largest population of which is in the mountains of Romania. Ancient historians report the brown bears of Europe to be largely carnivorous, regularly hunting both large and small game from reindeer to squirrels.

These are the same bears that were commonly used to fight in the Roman coliseum, pitted against each other, other exotic animals like lions and tigers, or even human gladiators in gruesome spectacles. As their habitat decreased, the Eurasian brown bear, and all brown bear subspecies adapted by eating more vegetation.

Over time, the once razer sharp cutting teeth located further back in the jaw, transformed to more molar-type flattened teeth in order to grind grains and process nuts.

Most brown bears today are omnivorous, digesting up to 85% vegetation. Fruits, berries, nuts, bark, roots and some flowers are eaten in massive quantities to power the bears enormous bulk, and the brown bear spends hours a day actively foraging for anything edible.

Regionally, brown bears will eat various protein sources like salmon on the Alaskan coast, and elk in the interior forests, and in the summer months the grizzlies of Yellowstone park may obtain 30% of their daily calories by eating entire colonies of moths and ladybugs!   - Grizzly Bear Facts The grizzly bear is a very large animal, often tipping the scales at well over 1300 pounds. Females are typically about 20% to 30% smaller than males, and both males and females will be considerably lighter in the spring, when they emerge from their 4 to 6 month long dormancy.

Grizzly bears, like most bear species, live solitary lives except for the time they will spend growing up with their mother and siblings, and a few days a year in the summertime when they will pair off to mate.

Grizzlies may have encounters with cougars, wolverines, wolves, black bears or coyotes, but these smaller animals will give way quickly, abandoning kills, dens and resting spots unless, in the case of a wolf or coyote pack, they have serious numbers on the grizzly, and even then, the risk is too great. A grizzly can kill a wolf or mountain lion with one swipe of its paw.

The big hump on the grizzlies back is a mass of muscle giving the brown bear the strongest front limbs of any animal in the world.

With no real natural enemies, the only conflict grizzlies have is among themselves. Males will compete with other males for territory and the right to mate with females by rising up on their hind legs and shoving each other.

They may swing at each other with their immense, paws, and can cause considerable damage. Occasionall,y grizzlies will kill each other in battle, and males will also regularly attempt to harm cubs that are not their own, causing injury or death to females.

Mother grizzlies spend a great deal of time avoiding solitary males, and must plan their activities around males territories and habits.

When confronted however, a mother grizzly is fearless in defense of her cubs, and often her fierceness alone will drive an aggressive male away, as he realizes she will fight to the death, and probably cause harm to him in the process, after all she is 6 feet tall, and 400 pounds of actual angry mamma bear - and from whence the expression came.   - Grizzly Bear Facts Grizzly bear mating and life cycle is similar to the polar bear in that there is an induced ovulation brought on by copulation, and then the eggs remain in a state of suspension until the female goes to den in the fall.

Once a male finds a receptive female, he may have to fight off other males to retain her company. Occasionally these battles are very violent, but usually they are more of a wrestling match to demonstrate strength and superiority.

Once paired up, a couple may stay together for a week or more, courting, playing and copulating often.

Interestingly, the female does not begin ovulation until after the courtship begins, and it is these days of sexual activity that induce the ovulation.

In another very unique aspect of both grizzly bear and polar bear reproduction, the females fertilized eggs will actually remain in a state of suspension, not growing or developing for the first four full months of pregnancy. During these vital months, the female must eat as much as she can, and will usually double her body size, gorging on salmon and the young of animals like caribou and elk.

She may put on an additional 150 pounds of body weight before her babies even begin to grow!

She will need this mass for the most critical time in any grizzly bears life, because what she does next is truly astounding.

Sometime in the fall, the pregnant female will dig a huge den for herself, often using the base of a tree to burrow under. When she settles in, she will not venture out again for 4 to 6 months, not even to eat.

She does not hibernate, which would require a slowing of the heartbeat, but her metabolism does slow, and in the dark of the den some time in January or February she gives birth to her tiny cubs.

Twins and triplets are typical, although up to four cubs are possible, and these babies are only about the size of a guinea pig. They nurse in the den until they reach about 20 pounds.

Exhausted and starving, the mother emerges from the den with her vulnerable troop in tow in late April or early May.

These first months out of the den are extremely dangerous times for cubs, and the biggest threat to them is from male grizzlies.

The female grizzly only mates every 3 to 4 years and so spends a long time with her cubs. Cubs usually spend a full four years with mom, before they leave her company.

Grizzly bears and polar bears have a very slow reproductive rate, and the care and skill of the mother bear is extremely critical. Because the factor is so vital, the maternal instincts are extremely strong, and mother grizzlies shower their cubs with love and affection.

This bond, the sheer length of childhood, and the dedication of the mother grizzly may be why grizzlies are so intelligent. They have years of dedicated training, support and guidance that many other solitary carnivores don't enjoy. - Grizzly Bear Facts

what do grizzlies eat? The grizzly bears who live on the coast of Alaska enjoy a bounty of food in the short summer months.

In cold streams and fast running rivers, scores of grizzlies congregate to fish for salmon. Because the food is so plentiful, the bears are relatively cordial, and at some peak areas of these rivers, bears merely need to wait with jaws agape and a salmon will leap within range.

The high fat content of these delicious fish serve to revive the depleted grizzlies who have spent nearly 6 months in a suspended state.

True hibernation is something reserved for smaller creatures animals and reptiles like garter snakes who are non-responsive when discovered hibernating, and whose core body temperatures are astonishingly low - sometimes down to 50 degrees.

Bears can be roused during dormancy, and females with newborns are intermittently fairly active in the den.

Along with salmon, grizzlies will hunt a variety pf prey including deer, caribou and even young moose. They will usually wait in ambush as opposed to stalking. They can be quick in the hunt, dashing out of hiding and knocking a hapless calf down with one mighty paw. The single blow will usually kill a young animal.

Grizzlies don't use a kill bite on the head or throat like many other predators, but will kill by quickly disemboweling their prey.

Grizzly bears have a tremendously varied diet, particularly when compared to the limits of bears like the panda, who eats bamboo almost exclusively, and the polar bear which consumes tremendous amounts of just two species of seal.

Along with salmon, various hoofed animals, and the natural staple of blueberries and blackberries,the grizzly bear will have a range that offers different roots and tubers, nuts, wild mushrooms, insects and grubs, and finally - if they happen upon one - honey bee hives.

Bears adore honey and their thick fur keeps them relatively protected as they shred open a hive and munch down the honey-comb.  - Grizzly Bear Facts

The grizzly bear has incredibly long, thick and powerful claws.

The nails themselves can be 5 to 6 inches long and thicker than a cigar. They use them to do more digging than any other bear species, uprooting shrubs, shredding logs and stumps in search of insects and tubers, and digging massive dens, sometimes in frozen ground, that must be large enough for them to maneuver in.

The fangs of an adult male grizzly bear are often close to 3 inches in length, but grizzly bears are more likely to do damage to an adversary or prey with a swat of their paw.

Powered by the massive muscles in the grizzlies shoulder hump, one paw swipe from a grizzly can kill an animal as large as a moose. - Grizzly Bear Facts 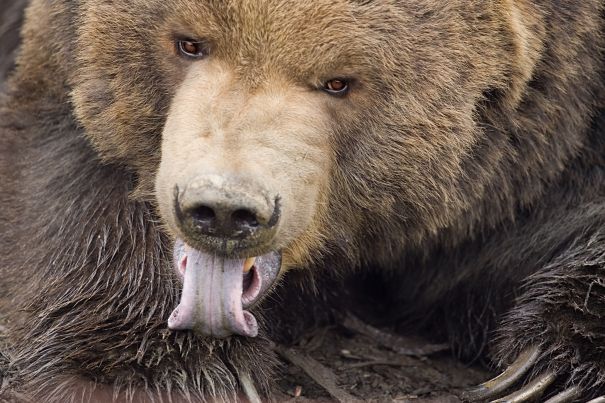