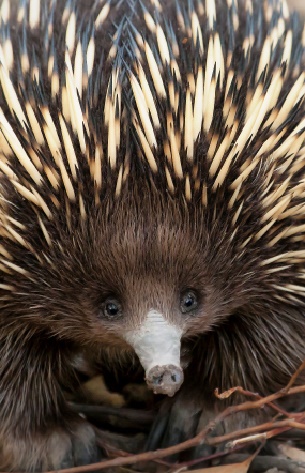 Portrait of an echidna

The coolest of all echidna facts is that they are a living "missing link" between mammals and reptiles. The echidna, and its only living relative the duckbill platypus, are monotremes, or egg-laying mammals. Of the 28 different orders of mammals, the monotremes are by far the most unique.

Some scientists suggest they should be further separated from mammals and placed in their own classification.

Although the echidna lays eggs, it also has hair and produces milk, so for those reasons it is considered a mammal. In fact, the echidna is the most primitive and most ancient living mammal. They can be found in Australia and southern New Guinea, and are basically insect-eaters living on worms, grubs, ants and termites, but they are not closely related to the anteaters, despite the common name "spiny anteater."

They are also no relation to porcupines or hedgehogs, even though they covered with similar modified hollow hairs, known as spines. The echidnas spines are closer in construction to those of the hedgehog. They do not have barbs and they do not detach like porcupine quills, and are not toxic or poisonous as is sometimes reported. The echidnas stout spines extend passed the length of their coarse fur and serve as their only line of defense against the myriad of animals that consider eating them. Passive and shy, these somewhat slow-moving creatures will roll up in a ball for protection.

They also wedge themselves between rocks or branches, their spines locking them in place and making them very difficult for a predator to extract. They may also attempt to quickly bury themselves in the sand or soil revealing just a layer of spines to discourage an attacking dingo, Tasmanian devil, or monitor lizard, but dingoes are known to roll them around till they are so dizzy and exhausted they eventually expose some softer parts of themselves. Tasmanian devils are known to eat them spines and all.

The long-beaked species are larger, with, as you might guess, a longer beak - sometimes as long as 8 inches. They can be almost 3 feet long and weigh over 25 pounds.

The short-beaked echidna averages 12 to 18 inches in length and can weigh up to 16 pounds. Males of all species are 20 to 30 percent larger than females.

Echidnas are solitary, waddling, basically peaceful animals. They live in a variety of environments throughout Australia, Tasmania and New Guinea, from snowy mountains to near desert, foraging for insects by using their strong, flattened claws to dig through soil and sand or rip open ant mounds and rotted logs. They can consume hundreds of insects at a time, licking them up with their long, tongue which is covered with thick, sticky saliva.

Echidnas have particularly large saliva glands to aid in the capture of insects, but also to assist in digestion. Instead of teeth, echidnas have hard pads on the roof of the mouth and the back of the tongue between which they grind up their food. The mouth is very small and they often have to crush larger insects with their claws before licking up the pulp. Their tongue is lightning fast and inspired the name of the short-beaked's genus - tachyglossus, meaning "fast tongue".

They are nocturnal in the warmer, lower elevations, sleeping during the day to avoid the heat. In cooler areas they may be most active at dawn and dusk, and populations throughout southern Australia tend to be active throughout the day. Some have adapted to urban environments, where they limit their activities to the wee hours, and often live completely undetected by humans. Is the echidna a mammal or a reptile? The echidnas egg-laying is not the only thing that makes it seem reptilian, in fact there are a whole bunch of physical features that are very lizard-like.

First, their body temperature, although not actually cold-blooded like a reptile, (unable to maintain its own warmth), is considerably lower than that of a mammal, and does not remain stable. It ranges from 86 to 90 degrees Fahrenheit, and echidnas may go into torpor - a kind of hibernation - several times a year if the temps dip too low.

Several bones of the echidna skeleton, most notably in the shoulder and skull, are reptilian in structure. The set of the shoulder girdle angles the front limbs out horizontally from the sides and than down, like a crocodile, and is distinctly reptilian in design.

In both sexes the intestines, the ducts of the excretory system, and the genital ducts all open into a common chamber known as the cloaca, with just one external opening. This one opening is where the name for the order monotremata comes from, mono meaning one, trema meaning orafice or opening. Reptiles and birds have a cloaca too.

The male echidna's penis is somewhat reptilian in that it is retained in the cloaca, and only extends away from the body when erect. It is quite bizarre as well, with the tip having 4 small heads, only 2 of which are used at a time.

All mammals have some degree of external ear structure known as the "pinna", except the platypus and the echidnas who have no pinna. But the spines around the ear opening move to capture sounds, just like some external ears might, and the echidna has excellent hearing.

Echidnas also have electroreceptors in the tip of the beak which help them locate insects, particularly earthworms, underground. The only other mammal with such abilities that we know of is a species of dolphin. Fish of all kinds, however, can detect electrical signals with a variety of electric organs, some located near the tail. But sharks are considered the most electrically sensative creatures on Earth.

So what traits make the echidna more mammal? Well, although some of the echidnas skeleton points to reptiles, the jaw and the middle ear are decidedly mammalian. The brain and heart as well. Also, echidnas have hair, which is exclusive to mammals, - two types of hair in fact, both body fur and spines. The echidna is a solitary animal except come mating season of course. Males are attracted to females and groups of them may follow her around for days in a single file line called an "echidna train." When she is ready to mate, she may engage a few of the suitors. With all the spines, mounting is a little tricky, and males will actually dig a little trench out behind the female to get lower than her and improve their angle.

Once mating is complete, the female digs a burrow which will be her nursery for several few months.

Echidnas do not have a permanent pouch like a kangaroo, but instead, as their mammary glands swell during her 22 day pregnancy, the extra tissue creates a rearward facing "pouch" of skin on her belly that she will lay her single egg directly into.

Echidna eggs are not hard-shelled like a bird, but have a leathery texture like a snake egg. After 10 days in the pouch, the baby rips open the relatively soft shell with a special "egg tooth", a sharp little tip on the top lip that soon drops off. The newly hatched baby echidna is called a "puggle", and is somewhat like a larva at this stage, pink, bald, blind, incompletely formed, and quite helpless at only an inch long.

The echidna mother does not have nipples. She excretes milk through the pores of two patches of skin inside the pouch called "milk patches".

The baby begins to develop spines in 2 to 3 months, and must leave the pouch, but the mother continues to nurse it for up to 7 months. She will leave the puggle in the burrow for a few days at a time and only return to feed it 2 or 3 times a week. The mother's milk is very rich, however, and the baby is content to nestle in the burrow.

At 5 months or so the baby is venturing out and foraging on its own. Once it is completely weaned, the mother will not return, but the baby may stay and use the burrow for up to a year after.