Portrait of a Bottlenose Dolphin

As members of the whale family, dolphins are fully aquatic mammals that spend their entire lives underwater. They only need to breath air from the surface once every 5 to 10 minutes using the blow hole at the top of their heads which is like a large nostril.

There are almost forty different species of dolphins with the killer whale being the largest.

The bottlenose dolphin is the species of "Flipper" fame that we are most familiar with, and the species that is regularly referred to as simply "dolphin".

The term "dolphin" is not synonymous with "porpoise". Porpoises are six species within the dolphin family differentiated by their flat teeth. So, simply put, all porpoises are dolphins, but not all dolphins are porpoises. The bottlenose is not a porpoise.

Dolphins live in groups of 5 to 15 individuals called pods. They have a very loosely structured lifestyle and freely socialize among many different pods.

Contact and interaction are critical to all whale species, and the bottlenose dolphin craves stimulation from its family, peers, and close friends, but dolphins will also reach out and connect with people on a regular basis, and will even joyfully interact with dogs and children on boating trips.

In the sea, their only enemy is the shark, but when in groups, dolphins are not afraid of sharks, and will torment and often kill a solitary shark.

Dolphins are amazingly agile and have athletic, muscular bodies that allow them to circle around a shark, dizzying and confusing it. Once the hapless shark is sufficiently stymied, the dolphins will ram the shark repeatedly with their strong snouts, delivering one heavy-weight blow after another.

Incidents of dolphins hunting down and killing sharks in this manner have been documented for centuries.

Although there are no incidence of fatal attacks by bottlenose dolphins on humans, the killer whale or orca, which is the largest dolphin species, has been known to attack humans while being held in captivity.

These attacks - several of which have been fatal- are no doubt out of desperation, and possibly psychosis, after an animal with immense intellect and emotional depth is kept in crushingly inhumane conditions. - Dolphin Facts All of the toothed whale species including dolphins, orcas, and porpoises use echolocation - a kind of "sonar" -to detect objects.

By bouncing sounds off surfaces which might be boats, fish, rock out-croppings or even people, dolphins can figure out an objects size, shape, and location.

Dolphins make clicking sounds of different frequencies through their blowhole and listen for the sounds to echo back to them. They can then form a mental image of what is around them.

This sixth sense is the dolphins most primary sense, used as they dive deep into dark waters. People who have been "echolocated" by dolphins report having felt a strange vibration!

Dolphins have been caught and killed in fishing nets for hundreds of years because the echolocation they use can't identify a net. Happily, new nets with plastic beacons attached to them reflect and amplify the dolphins sonar and are saving many lives. An amazingly simple solution! - Dolphin Facts The social life of a bottlenose dolphin is an active one with different pods merging and intermingling and individuals often moving happily about among several social groups.

Dolphins are rather sexual creatures and engage in lots of activities that may appear to be purely for pleasure and without reproduction in mind.

Group activity and activity between members of the same sex is very common and appears to strengthen bonds. Mating may occur at any time throughout the year, with any number of partners, but females appear to only have one calf every 3 to 5 years.

The females in the pod will protect the mother and assist in the birth. The calf is delivered tail first and a mid-wife or aunt will nudge the calf to the surface for its first breaths of air while mom recovers from the labor.

The calf swims actively at it's mother's side and nurses from her within moments of birth. Mother dolphins speak to their little ones constantly, and soon the baby is communicating with its own squeaks and clicks.

Dolphin pods have their own culture, and each individual pod may speak with a slightly different recognizable  "accent" that differs from pod to pod, and also regionally.

Baby dolphins will nurse for up to 18 months and will live with their mothers for 5 or 6 years before jumping into the deep end of the busy dolphin social scene.  - Botlenose Dolphin Facts

the quest for big air We've all marveled at trained dolphins leaping into the air at the blast of a whistle, but getting airborne seems to be a natural desire of all dolphins and whales.

Even the largest species of whales like humpbacks and blue whales engage in the exciting activity called "breaching". The question is why?

Scientists have debated for years on this subject suggesting that leaping dolphins or whales are clearing parasites off of their bodies, looking around for flocks of seagulls that might indicate a school of fish in the distance, or announcing their presence to those nearby.

Given these animals astounding intellect, maybe they are just enjoying the thrill of exertion, engaging in  sport as you or I might if our bodies allowed.

Many people describe the bottlenose dolphin as smiling.

The sweet expression of the bottlenose dolphin is one that melts many human hearts, but if you take a closer look you will see that the smile never changes.

Even if a dolphin is ill, stressed or frightened, the lips remain curved in what we perceive to be a cheery grin.

Dolphins communicate mood to each other with a huge vocabulary of clicks, tones and chatters, as well as body and tail movements, but their faces, like the rest of their bodies, are lined with inches of  blubber that hinder any change of expression. -Dolphin Facts 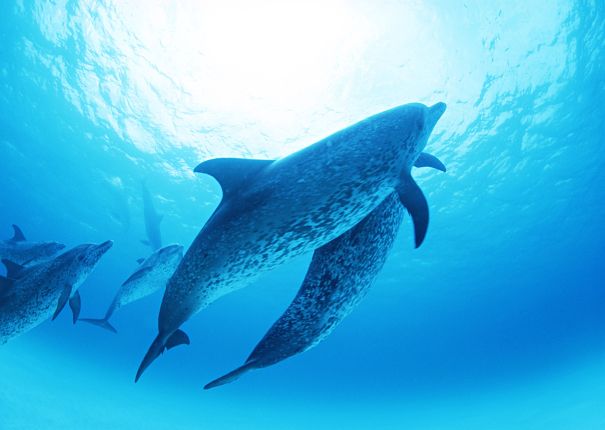 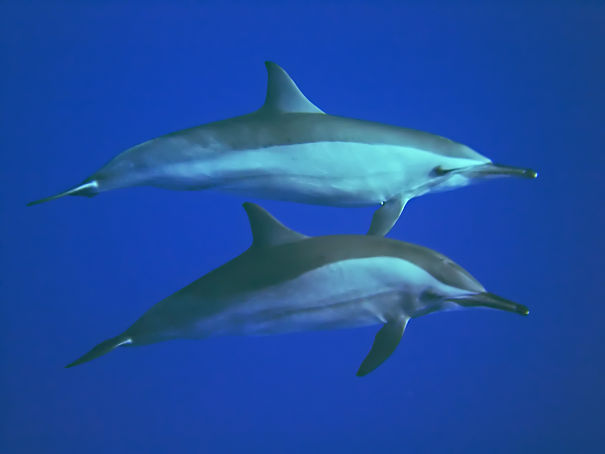 Dolphins are members of the delphinedae family which is over 30 species of small toothed whales. Some of the largest dolphin species are referred to simply as whales including pilot whales and of course killer whales, also known as orcas,

There is also a completely separate family of four dolphin species that live mostly in freshwater rivers.

All whales have a blow hole through which they breathe air from the surface. The blow hole is effectively a single nostril.

Within the blow hole are delicate folds of skin known as "phonic lips" that create all the different clicks that dolphins use to communicate. The whistle sounds are produced by the larynx - so dolphins can create more than one sound at a time.

Dolphins don't have gills and can't breathe underwater. They do not breathe at all when submerged, and when they surface they must make a make a conscious effort to take a breath.

Because their breathing is no longer automatic, as it surely was when dolphins were land mammals,  only one hemisphere of the dolphins brain goes to sleep at a time, the other half stays awake, with one eye open, to take in a breath every 5 minutes or so. - Dolphin Facts 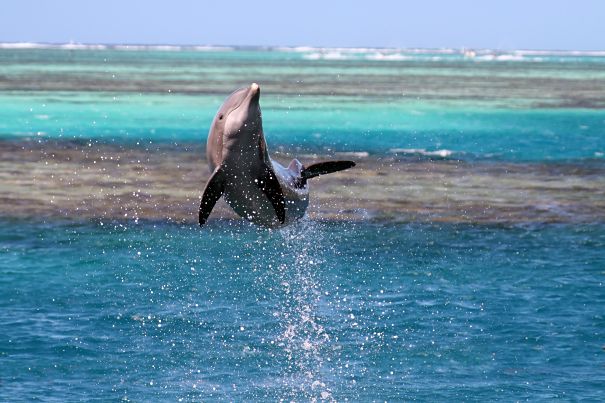 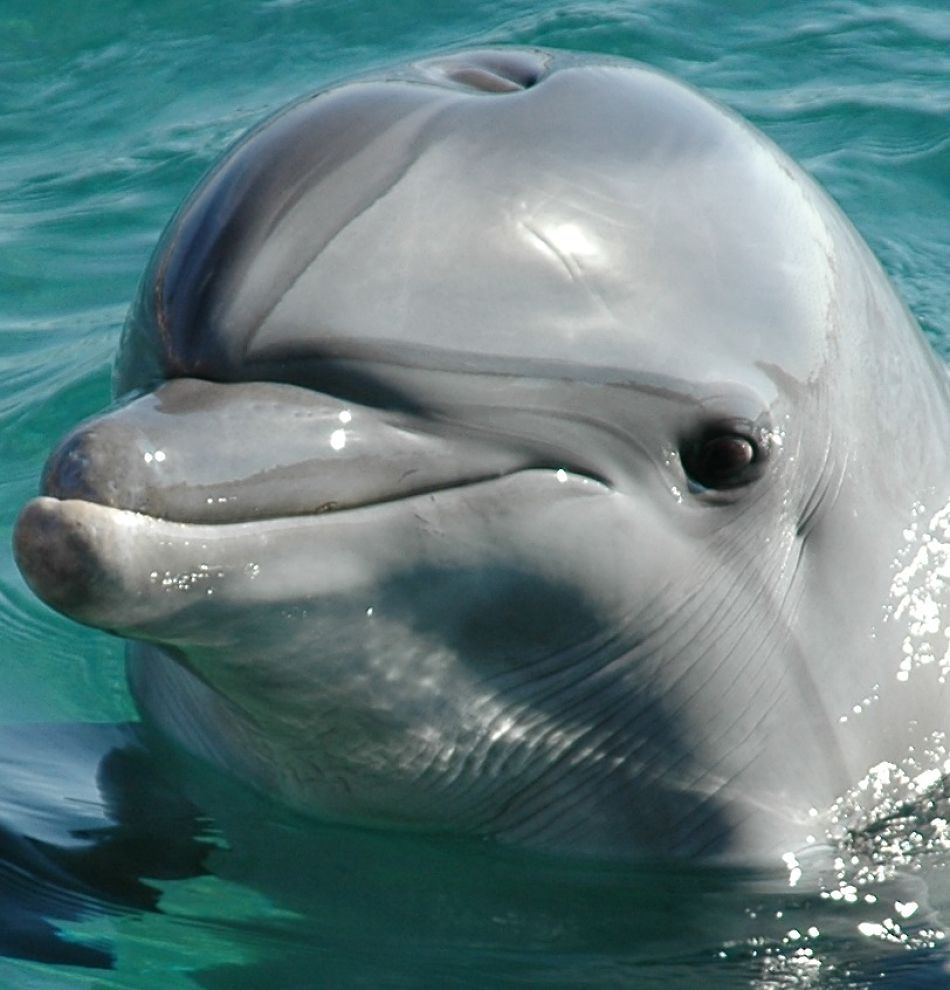