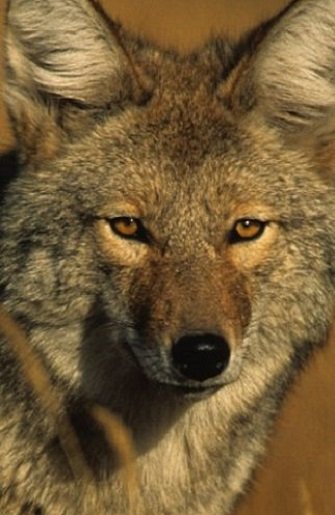 Portrait of a Coyote

A large, active, and highly intelligent member of the dog family, coyotes are described as wiley, cunning and sneaky, but what they really are is flat out smart.

They are one of the most adaptable and skilled survivors in the animal kingdom,  existing on snowy mountain ranges, desolate deserts and big cities up and down North and Central America from Panama to Alaska.

Despite their clearly carnivorous teeth, they willingly and actively eat practically anything, including fruits like watermelons, pears and strawberries, and vegetables like brussel sprouts and corn on the cob!

When sneaking through a farm in the dark of night, a coyote may raid the crops and the chicken coop, and may also snack on family pets that are not properly protected, making them extremely unwelcome visitors.

But despite people's active and ongoing attempts to eliminate them, the coyote population is larger than ever.

It is very similar to wolves in size and structure, yet the coyotes advanced coping abilities have saved it from the endangered status of the unchanging wolf, and brought their familiar howls to our backyards, proving success and popularity are two very different things  - Coyote Facts 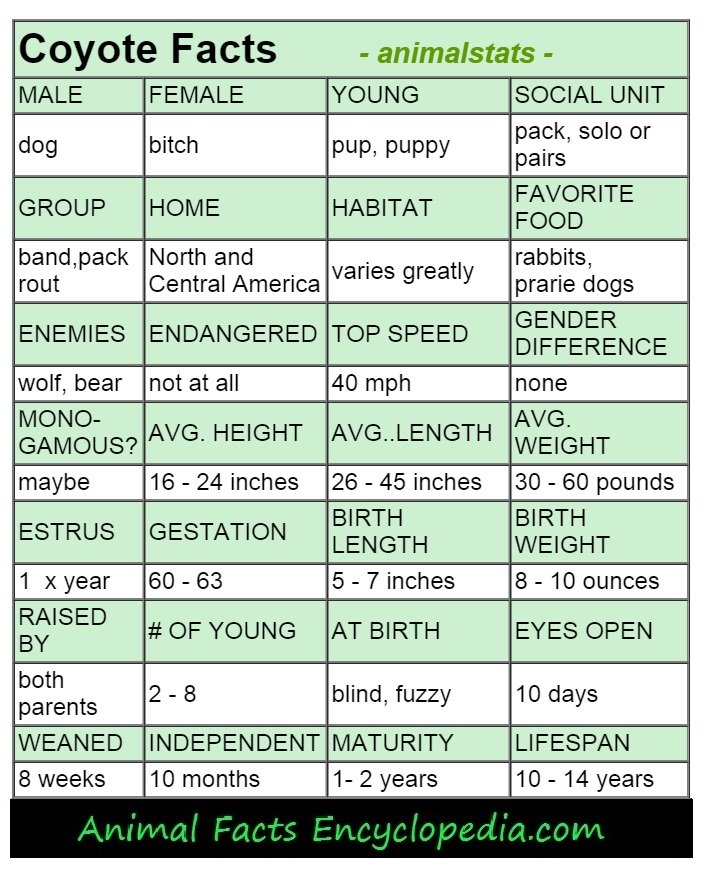 Like most dog species, the coyotes life is complex and varies from region to region.

Dictated by climate, available range and food supply, the coyote may be a 60 pound, thickly furred mountain animal, nearly two feet tall at the shoulder, or a scraggly 25 pound nuisance, diving into the dumpster of a roadside diner.

Perhaps the most clever of the canines, and adapting to towns as well as countrysides, the coyote has managed to expand its range and increase its population while other species struggle or fail.

These are relatively large animals when you compare them to the other creatures that have adapted to urban and suburban environments.

Twice the size of most raccoons, opossums and feral cats, the coyote is silent, stealthy, and also remarkably clean.

Coyotes leave little debris behind when they den, sleep or eat. They often cover remaining scraps of kills and also bury their excrement, meaning they could be living right under your porch and you might not even know.  Coyote Facts Generally coyotes spend allot of their time alone, but will come together in casual packs when and where the hunting is good, and pair up once a year for mating.

It is believed that coyotes may actually have the same partner for life, spending time apart for several months of the year and finding each other in the late winter.

They will mate together over the course of several days, and will stay a pair for a few months a year, raising the family together.

When the female is a few weeks into her two month long pregnancy, she will dig a den. She will give birth to 3 to 8 puppies who are blind and helpless.

The male will stay close by, bringing small kills back to the den, or regurgitating food for both mother and pups. As soon as they can walk, the puppies are actively seeking foodstuffs, stalking insects, and sniffing for rodents.

They begin to break away from mom by winter, but parents and their offspring may visit eachother and live together off and on, throughout their flexible and fascinating lives.  -Coyote Facts

call of the wild The amazing howl of the coyote starts with small staccato yips and blossoms into a swoon of eeriness.

A lonely sound that some say is used to summon pack mates, partners or young, it is more often than not, just a song in the night.

Coyote pups as young as 3 weeks old have been observed practicing howling at the foot of their den, surprised and delighted by their own innate ability - Coyote Facts

you talkin to me?

Perhaps the coyotes reputation for wiley behavior stems from their somewhat shady facial expressions, and the sense that sneaky thoughts are brewing just behind those yellow eyes. - Coyote Facts One of the largest canines in the world, the coyote exists on some of the smallest prey.

Coyotes will eat fruit, berries and grasses in season and actively pursue numerous species of quail and other ground birds (like roadrunners!), pouncing on unsuspecting adults, and raiding their nests for eggs and young.

When hunting small game, they will listen intently, and creep quietly until they detect something beneath the snow or in deep grasses. With pinpoint hearing they determine the exact location of their target, spring into the air and land with both front paws -jaws not far behind- on the unfortunate creature.

Coyotes sometimes team up in spring and fall to form pairs or small packs that will run down larger prey like deer and pronghorn antelope to exhaustion using a tag-team approach similar to the hunting style of wolves.

But usually it's every coyote for themselves.

The roadrunner is a fairly common bird in the southwestern U.S. and Mexico.

A member of the cuckoo family, it spends most of its time running rapidly about the desert catching insects and small reptiles. Roadrunners can fly, but just a little, and don't gain much height.

Coyotes and roadrunners live in the same environment and coyotes exist throughout the roadrunners entire range.

While not a staple of the coyotes diet, they are eaten by coyotes, but they don't say "meep, meep" - that part was invented for the cartoon staring Wile E. Coyote.