Portrait of an American Buffalo

The American buffalo is one of the icons of the United States of America and, along with the bald eagle, can be found depicted on various coins and flags throughout the nations history.

In recent times it is considered by some to be more accurate to refer to the New World buffalo as a bison, since it is not in the same genus as the two buffalo of the Old World.

The argument is debatable however, because the old world buffalo do not share a genus either, and there is a fourth animal called the gaur or "Indian bison", which belongs in yet another separate genus, with different lineage.

The fact is, there is little confusion in identifying the animal, particularly when the term "American buffalo" is used, and just as we commonly say "dog" and "cat" instead of "Canine" and "feline", the common term should not be considered incorrect.

The animal has been referred to as a "buffalo" - which is a form of a French word "boeuff", simply meaning "large cow", and from which the word "beef" also comes - throughout its history, and the word "buffalo" has been used in reference to the American animal as far back as 1635.

There is a European bison as well, that, although separated by oceans, looks very much like the American bison or buffalo, and is basically considered to be the same animal.

The Old World "buffaloes" are the Cape buffalo of Africa, and the domesticated water buffalo of Asia. The most obvious difference is that they lack the thick, woolly fur of the American buffalo, and are usually black in color.

The horn shape is different as well, with the Old World buffaloes having longer horns that curve back in towards each other.

Finally, all of these animals are bovines from the subfamily bovinae, which are all basically cow-like animals with cloven hooves and multi-chambered stomachs.

The American buffalo once numbered over 65 million strong across almost the entire continent of North America. By the end of the 1800's their numbers were reduced to a few hundred.

Now, with organized conservation efforts, the number of wild bison roaming the open range is about 16,000, and there are close to 500,000 individuals living in large, privately owned herds.

native americans and the american buffalo 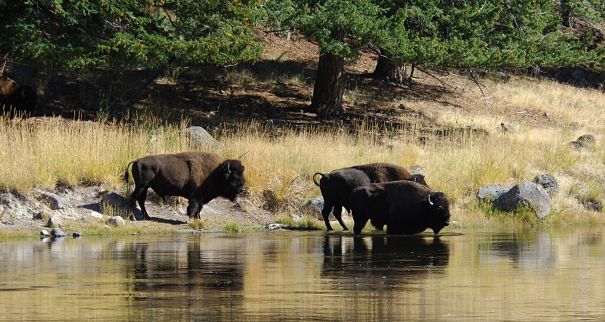 The American bison or American buffalo once roamed the continent of North America in such mass, that a galloping herd would leave a black swathe of trodden soil in its wake.

Native people, particularly the Dakota, Lakota and Nakota Sioux, were indebted to the buffalo for their very lifestyle. These tribes followed the buffalo and planned each year around the migrating herds.

Before they had horses, they would drape themselves in wolf hides and crawl close enough to use a bow and arrow. This technique worked only with herds of "bachelor" males who did not fear wolves. The Indians found they could approach within yards of the herd when wearing wolf skins which hid their scent, where the buffalo would flee if they caught the scent of the  Indians approaching.  Herds with females and youngsters were wary of wolves and could not be hunted with this technique.

Indians in the Dakotas employed a very dramatic hunting style, which involved stampeding a buffalo herd over a cliff. This was called a "buffalo jump" and there is a particular site in South Dakota where thousands of buffalo bones and hundreds of Indian arrowheads can be found at the foot of a steep cliff.

The native Americans had great respect for the buffalo, and some believed in a deity with the head of a buffalo called Tatanka. The word was also used as the word for buffalo in many Sioux native American societies.

Because of the plains Indians dependency on the buffalo for their survival, the animals were hunted down by the U.S. Cavalry in numbers so great that the army could not use all the meat and hides.

They literally burned thousands of carcasses after slaughtering them, so that they could not be utilized.

In the Indian culture, almost every part of the precious animal was harvested and put to use. Hides for clothing and tepees, bones for tools, each edible part used for different recipes and tonics. The tongues, eyes, horns and hooves all put to use.

For the Native American, the sight of their precious buffalo slaughtered and burned, must have been simply horrible..

Kinder hearts prevailed in the last years of that century, and the preservation of the species can literally be traced to several small groups of individuals moved to areas of the country where they would be protected.   - Buffalo Facts Buffalo lifestyle is actually similar to the lifestyle of the African elephant. The herd is led by a wise matriarch who chooses grazing areas and napping sites and schedules throughout most of the year.

Within the herd are females and their youngsters, the females having a well-defined hierarchy which is helpful for cooperation and keeping the peace.

Males live in smaller groups called "bachelor herds" and occasionally will move about in solitary until the mating season. In July, females begin to come into season and the males will start their attempts to attract willing females.

Dominant males will bellow, charge and head- but other males to keep them away from their females. These battles are not generally serious and the less aggressive or smaller male will simply find another female to tend or wait till later in the season.

Mating season will last until September, and then the males will recede back into their own herds. Males have nothing to do with the rearing of calves.

The calves are born a much lighter color than the adults. They have thick wool, and small tabs on their heads called "buttons" where their horns will soon start to grow. The females raise their calves in their maternal herd where the excitable youngsters frolic together in little "kindergartens" that are watched over by all the mothers.

When calves are young, they may fall prey to bears or mountain lions, but wolf packs pose the greatest danger.

Wolf packs are particularly skilled at hunting buffalo, and use their classic "tag-team" hunting approach to run the herd until the weakest fall behind.

The gift of speed and the ability to run is critical to the survival of the young buffalo, and newborns are up and running with the herd within 20 minutes of birth.

why aren't there domestic buffalo? The buffalo is basically a very large cow - a ruminant which has a four-part stomach for breaking down food that would be undigestable by many other creatures.

It spends long hours chewing and re-chewing the grass of the plains. With their short necks they only can bend their head down and eat comfortably to a height of about six inches, and by leaving that amount of grass, the plant survives and regenerates.

Buffalo usually drink by walking into the stream or river till they can comfortably reach the water.

Their incredibly plush fur sloughs off in the summertime in sheets, in a process, called "moulting", which leaves mounds of discarded hair throughout the valley.

Attempts to domesticate the buffalo have failed miserably, and often resulted in injuries, because along with its immense size, the buffalo has a wild heart and has been described by those who tried, as being an animal that simply can't be tamed.

Even buffalo cows raised in captivity refuse to be milked.