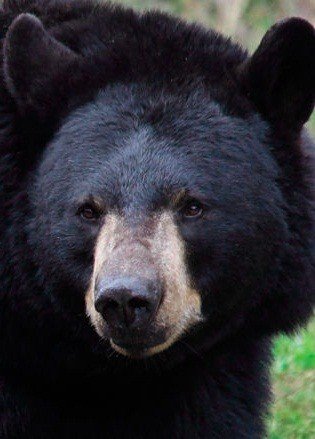 Portrait of a Black Bear

Of the eight species of bears, the American black bear is right in the middle size-wise, but on it's home continent of North America it is the smallest native bear, dwarfed by the polar bear and the grizzly.

Black bears are solitary animals who socialize only during the brief mating season. They have large territories that they mark with droppings, scatch marks and urine sprays. Black bears use trees called "bear trees" by trackers and hunters to define the perimeter of their range.

They will claw, bite and rub all over the bark and branches of specific trees to warn intruders.

Being extreme creatures of habit, they will walk the same trails as they patrol their range, and often step in their own exact footprints over and over again during the course of a season.

Males and females are equally territorial, but confrontations are fairly uncommon unless the land is being encroached upon. Bears have such an amazing sense of smell that they rarely run into each other unintentionally.

It is believed that the black bear can smell humans, bears and other animals up to 5 miles away if the wind is right. Based on the extensive nasal structure and the addition of the "jacobsens organ" located in the roof of their mouth that also aids in odor detection, the black bear has a sense of smell seven times more powerful than that of a bloodhound.

Black bears commonly enter populated areas to forage and even den, and over the last three decades, their populations have surprisingly increased.

They have become more of a nuisance, if not an absolute danger, in the suburbs of the Northeastern United States. New Jersey, Maryland and Pennsylvania in particular, have had issues with black bears that seem to have lost their fear and apprehension around humans, and hunting seasons have been extended in an attempt to control the population.

It is actually a testament to the intelligence of these remarkable animals that they are thriving while other much smaller species have succumbed to the spread of human development.

Not just another pretty face, the American black bear is a very clever and determined creature. -  Black Bear Facts The black bear of North America is referred to as the "American black bear" to differentiate it from its somewhat smaller cousin the Asian black bear.

The Asiatic bear is the American bears closest evolutionary relative. They became separate species when the ancestors of today's black bear came across the Bering Land Bridge from Asia more than 3 million years ago.

The Asian bear is generally smaller, has very large, pale colored claws, and has a distinctive yellowish mark on its chest, reminiscent of a half-moon, that lends to it also being known as the "moon bear". The Asian black bear has a similar lifestyle, and fills a similar ecological niche as the American bear, living in forests of southeast Asia and foraging for mainly a vegetation based diet.

These bears are hunted for various body parts that are used for Middle-Eastern medicine, including their gall bladders, their claws, and their eyeballs.

As for the American black bears name, it was called "black bear" by early settlers of the east coast where the body color tends to be generally quite dark.

But the black bears of the western territory can have a reddish-brown, cinnamon, or even buff coloration, while on the Pacific coast two sub-species have fur with a distinctive blue tinge.

So black bears in more westerly areas may have the same coloration as brown bears, and they may have overlapping territories as well.

The black bear is distinguishable from a grizzly or brown bear of similar size by numerous differences including its larger, more elongated ears, and the lack of the large shoulder hump that brown bears have. In profile the body shape is clearly different when observing the shoulder line and neck and head placement, the brown bear having a decidedly more muscled and hunched look

The facial profiles differ as well with the brown bear having a bit of a "dished" face, and almost a turned up nose.

Finally,at 3 to 5 inches long, the front claws of the grizzly bear are almost three times longer than those of the black bear, and are light or even white in color. Black bears have much shorter nails at under 2 inches, which are usually dark in color   - Black Bear Facts black bear cubs up a tree

Black bears live solitary lives but come together in May and June to mate. Local males may battle for a females attention. Occasionally these battles are violent, but usually they are more of a wrestling match to demonstrate strength and superiority.

After they pair up, a couple may stay together for a week or more, courting, playing and copulating often.

Interestingly, the female does not begin ovulation until after being courted, and it is these days of sexual activity that induce the ovulation. In another very unique aspect of bear reproduction, the females fertilized eggs will actually remain in a state of suspension, not growing or developing for the first four full months of pregnancy.

During these vital months, the female must eat as much as she can, and will gorge on whatever food stuffs she can forage or hunt. She may gain as much as 150 pounds before her babies even begin to grow!

She will need this mass for the most critical time in any black bears life. For what mother does now is truly astounding. Sometime in the fall, September or November, the pregnant female will dig a massive  cave for herself, and once she settles in, she will not venture out again for 5 to 6 months, not even to eat.

She does not hibernate, which would require a slowing of the heartbeat, but her metabolism does slow, and in late January in the dark of the den after 6 months of pregnancy she gives birth to her tiny cubs. Up to six cubs are possible, but three is typical and these babies are only about the size of a hamster when first born. The cubs will grow to be about 15 pounds in the den.

Around May, the mother black bear emerges from the den exhausted and starving with her vulnerable troop in tow.

After almost two years with mom, the young bears will leave her company. Black bears have a very slow reproductive rate with females maturing slowly and usually having cubs every other year, or every three years.

The care of each cub and the instincts and skill of the mother bear are extremely critical. Because the factor is so vital, the maternal instincts are extremely strong, and mother black bears, like bear mothers of all species, shower their cubs with love and affection.

They can also be notoriously dangerous if they feel their cubs are threatened, and will defend their family with great ferocity and fearlessness. - American Black Bear Facts

what do black bears eat? Thousands of years ago, the black bear was probably far more carnivorous than it is today. Lack of territory and resources however, created a very omnivorous creature that is up for eating nearly anything it finds.

Up to 95% of the American black bears diet is plant-based including, nuts and berries, roots, buds and shoots. They will also dig for grubs and tear tree stumps open in search of termites, ants and the occasional bee hive full of honey comb.

All bears have very long tongues that they use to extract insects from nests almost like an anteater.

Some individuals will eat small prey like mice and birds. Others may become adept at hunting deer fawns but this is not typical. In the height of summer, individuals lucky enough to live near a stream that isn't teeming with brown bears will enjoy fishing for salmon.

Finally, the American black bear is a talented climber and even the largest specimens spend time in trees foraging for fruits like pears and crab apples - Black Bear Facts